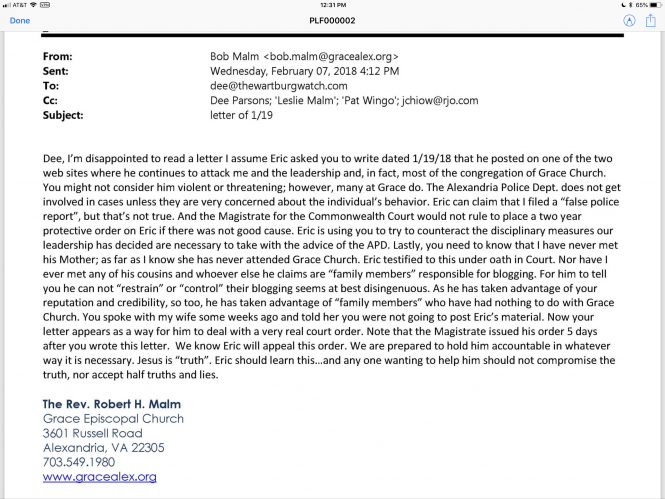 Earlier today, I requested criminal charges against perjuring priest Bob Malm. This results from Bob Malm’s repeated efforts to dissuade witnesses from testifying on my behalf. These requests have been made via phone and email, and have allegedly occurred as recently as December 2020.

Of course, folks at Grace Episcopal Alexandria, the clergy perjury parish, will be quick to discount this news and try to attack me by claiming that I am mentally ill. That is just part and parcel of their notion of Christianity. But the email below, which was sent AFTER perjuring priest Bob Malm knew that Dee Parsons will be one of my witnesses at trial, is irrefutable evidence of Bob’s efforts to engage in witness tampering. Indeed, Malm specifically mentions that litigation is ongoing, thus proving that this was not an off-the-cuff effort.

Even better, the email in question copies diocesan officials and Jeff Sugarland Chiow, a parishioner and the attorney representing perjuring priest Bob Malm and the parish. That raises the question: What part of “this is a really bad idea” does Sugarland not understand? Why did he apparently not tell his client to cease and desist?  It’s not like Sugarland is straight out of law school, either.