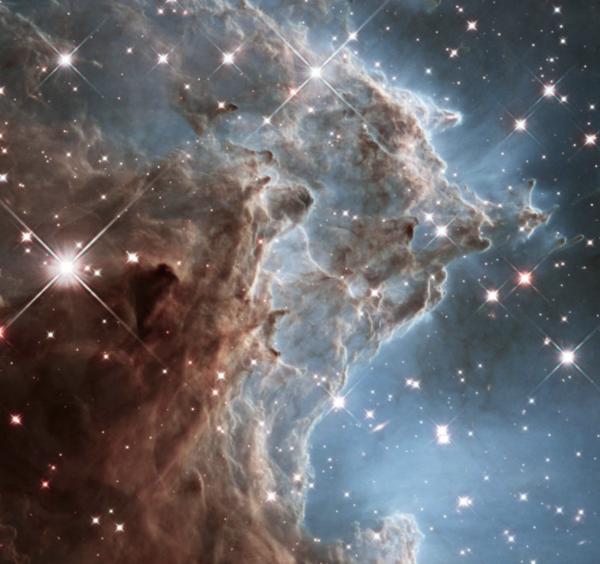 When Christians Lie: Eric Bonetti Accused of Embezzlement and of Being a Pathological Liar by His Former Church and Pastor.

Sin has many tools, but a lie is a handle that fits them all. Oliver Wendell Holmes, Sr.

Years ago, a small group of us approached the pastors of our Reformed Baptist church. We became aware that they had been told that a seminary student had been encouraging teen boys to expose themselves, etc. and decided to ignore it, calling it locker room humor, etc. Well, the die was cast and we became the declared enemies of the church.  Many things were said by some of the pastors. I realize that I was dealing with men who easily abandoned truth to lie about us personally. The head elder spread a rumor about me.  *Her marriage is in trouble.* He had absolutely no reason for saying this, yet repeated it enough that it got back to my husband and me. Several years later, this *elder* eventually met with my husband (I was not invited since I was just the wife) He admitted that he did spread the rumor and asked for my husband’s forgiveness.

Many teen boys were seriously injured by the SEBTS seminary pervert who was eventually imprisoned. Instead of focusing on the problem of hurt teen boys, the church leaders appeared to me to embark on a campaign to discredit us. That also seemed to be their chief concern. It didn’t work. Instead, it caused me to decide to start this blog. Twelve years later, I’m still married, I have this blog and the church subsequently went through some difficult years.

Why in the world would any Christian leader lie about my marriage when we were talking about helping hurting boys? I tell this story to show how easy it seems for Christian leaders to resort to lies and insults to defend themselves and their BFFs. Joe Carter of The Gospel Coalition accused me of libel as well as being a liar. I was one of the first people to write about the problems inherent in Sovereign Grace Ministries. He believed was defending his BFF, CJ Mahaney, by insulting me. I wonder if he thinks Al Mohler is now guilty of libel as well?

What is it in our souls that cause us to lie about others when we are on the spot?

Tom has a blog that disclosed the problems with Mac Brunson, then the lead pastor of FBC Jacksonville. Mac Brunson would go on to tell the state attorney he needed to find out who this anonymous blogger was because he was afraid for his wellbeing. This was an absolutely ridiculous lie. The moment Brunson found out Tom’s name, he got an anti-trespassing order against him. The state attorney told me that such an action was not the intent. Brunson publically accused Tom of being “obsessive-compulsive” and “a sociopath.”

Tom did what anyone might do in this situation. He sued Brunson, the church, the state attorney, and the sheriff and deputies who went along with this baloney. He won!! Brunson had to publically apologize amongst other actions.

Pastor Mac Brunson of First Baptist Church in Jacksonville apologized Sunday for certain terms he used in statements about a blogger who criticized his leadership. The apology came at the end of the morning service, and the congregation responded with applause.

In April 2009, Brunson was quoted in a Times-Union story as saying that persistent criticism on FBCJaxWatchdog.blogspot.comindicated the blogger, Tom Rich, had an “obsessive compulsive problem” and was a “sociopath.”

In the apology Sunday, Brunson said that he regretted using the terms and that Rich is not “obsessive compulsive” or a “sociopath.”

Poor *widdle* Mac Brunson. Someone criticized him and he couldn’t take it. He stomped his foot, called Tom names which were psychiatric diagnoses. Mac is no psychiatrist and he lied about Tom. He could have prevented this ridiculous situation but instead took this way too far and lost. He will forever be painted with his foolishness. I thought of Tom when I considered Eric Bonetti’s lawsuit.

Shades of Tom Rich! Eric used to work at Grace Episcopal Church which is in a lovely section of Alexandria, VA. However, his priest, Father Malm didn’t see eye to eye with Eric on several occasions. Things began to deteriorate when Eric suggested that there be a financial audit. You can read the story here.

Yes, I originally had that posted here but, in an attempt to bring some calm to the situation, removed it from the blog with the hopes that reconciliation could be achieved. Unfortunately, things have continued to spin around the drain, and Eric and I talked about a way to discuss this situation in an agreeable manner.

Here’s the deal. When anger takes hold of a situation and clergy feel prevailed upon, leaders are tempted to make up things without any proof whatsoever. My experience, along with Tom Rich’s incredible situation at FBC Jacksonville, stand as examples of what not to do.

In this situation, one individual, who was hired by Eric in a previous job, in 2017, claimed that Eric had embezzled money.  Then channeling Joe Carter of The Gospel Coalition, she claimed that Eric was a pathological liar. She allegedly did this in an email to Father Malm, posted below. (Circled in blue.) Then, Father Malm reported this to Bishop Johnston, including a comment that it is *pretty bad stuff.”

Embezzlement is a serious charge, one that has legal implications. Eric has suggested that, if this is true, then she should report it to the police. However, as of this time, law enforcement has not been involved. Why not? If it is true, report it. If not, such a charge could prevent Eric from getting a job.

Calling someone a pathological liar is also problematic. This is a diagnosis that can only be determined by a licensed health professional. Such an accusation can be quite detrimental to the person on the receiving end. Remember, Pastor Brunson had to apologize for calling Tom Rich a sociopath which only a licensed health professional can determine.

Then, Father Malm sent these accusations to Bishop Johnson which spreads these charges beyond a private conversation between two people. 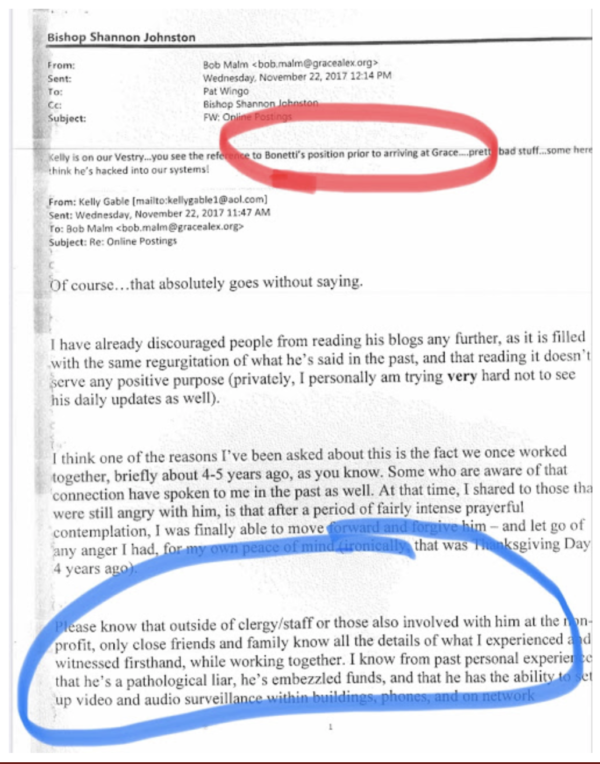 In the end, I think some folks just got bent out of shape and, instead of forgiving and asking Jesus for strength to be kind, decided to add to escalate the situation. I am no lawyer but there are elements of this case that remind me of the unjust actions of the pastor and law enforcement against my good friend, Tom Rich. I think his story is one that everyone should consider. There is no question in my mind that, had Mac Brunson came to Tom and apologized, there would not have been a trial and a subsequent public embarrassment for the church.

I will continue to pray that reconciliation can still be achieved in this situation.

But now you must also rid yourselves of all such things as these: anger, rage, malice, slander, and filthy language from your lips. 9 Do not lie to each other, since you have taken off your old self with its practices10 and have put on the new self, which is being renewed in knowledge in the image of its Creator.

Translation: Church leaders, cut it out, and grow up. Act like big boys.