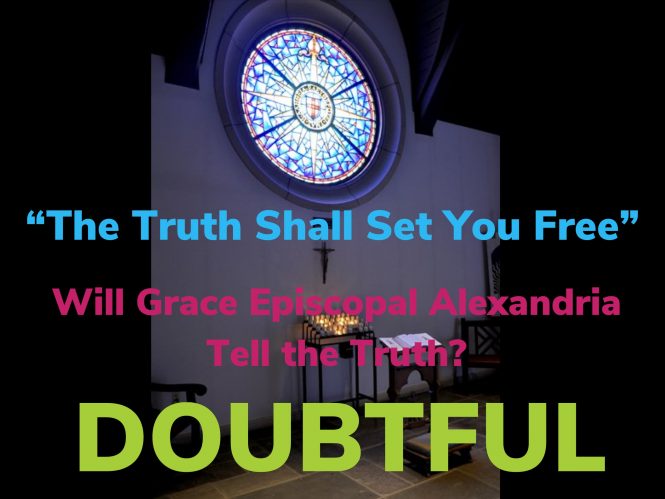 Today was Anne Turner’s first day as rector.  My feeling is that she did well — really well — but she has a long and daunting road ahead of her. As a result, I am not convinced she will succeed, but believe the odds are in her favor.

To be sure, Anne did a great job of exploring the tension and conflict out there, both in the parish and in the world at large. And she did an awesome job of speaking to the camera and a virtual audience.

But the problem is that she takes over as rector after 30 years of Bob Malm’s narcissism. And like most narcissists, perjuring priest Bob Malm did a great job of convincing people that all was well, great and good at Grace. That, despite the fact that more observant parishioners knew Bob to be a bully. And one former assistant rector said (exact quote), “Bob has been getting away with murder for years.”

In other words, a great many parishioners have no concept that Grace is screwed up, and they get indignant if anyone broaches the idea. But that is just one aspect of narcissism and narcissistic organizations—they invariably claim that they are special. Or, as perjuring priest Bob Malm once put it, “I don’t think I exaggerate too much when I say that, here at Grace, we practice true religion”

Outsiders readily see the problems at the church. As one priest in the area put it gently, “They have a lot of work to do.”

That’s spot on. This is a church where it’s okay:

Of course, Anne may have implicitly recognized some of these issues, when she recognized during her sermon that conflict brings with it opportunity. But how do you convince folks who think that the myriad problems the church faces need to be addressed, when they think the behavior described above is just fine?

And for the record, I will never back down unless the church tells the truth. As in perjuring priest Bob lied about being threatened. As in Jeff Chiow behaved inappropriately. As in there is no evidence to support perjuring priest Bob Malm’s claim that my Mom or someone purporting to be her contacted him repeatedly.

Nor will the church survive if it does not tell the truth. I hear all the time from people who have taken a pass on the church due to our conflict; in fact, I had brunch yesterday with one such person. Thus, the approach of the Malm years, of sweeping conflict under the rug, or Bob trying to lie his way out of it, or demonizing the other side, is not going to cut it.

And with the ongoing precipitous decline, both in the Episcopal Church and at Grace Church, if nothing else, I can outlast the church. And that is true regardless of how the current litigation turns out.

Or, as the rose window in the Perjury Place Narthex says, “The truth shall set you free.”