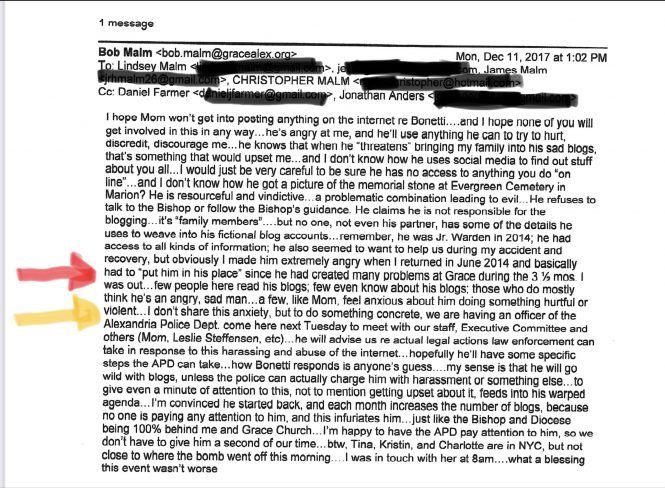 In this email, recently obtained via litigation, perjuring priest Bob Malm admits he’s not worried about the prospect of violence. Yet he repeatedly has lied in court, saying the exact opposite.

Of course, it’s not his first statement against interest. In fact, he told Shannon Johnston in an email that his wife and one of his daughters took the whole thing far too seriously.

What’s interesting too is that this is one of the emails that Sugarland Chiow improperly withheld during initial discovery. And several of the recently obtained emails show that Sugarland was copied on the email itself, so he knew of their existence. That forms the basis of the disciplinary complaint against Sugarland.

Sugarland’s conduct also reflects on Grace Episcopal Church, as does that of perjuring priest Bob Malm. And to this day, neither the vestry, nor Jason Roberson, nor Michael Guy, nor Susan Goff have acted like adults in this matter.

So, if a priest who engages in perjury, and a church that engages in defamation, unethical conduct during litigation, and more is your cup of tea, Grace Episcopal Alexandria is the right church for you. And as the email says, the diocese is 100 percent good with this, so that tells you all you need to know about the fat cats in Mayo House and their bloviating about social justice.