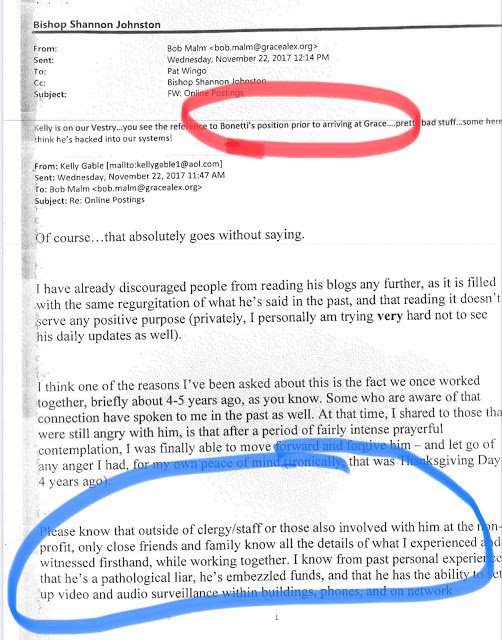 In perjuring priest Bob Malm’s recent pleadings, he makes a series of bogus claims. But chief among them are the lie that the previous protective order was issued due to harassment. That’s not possible, because the law makes no such provision. So via a Request for Production, I have asked him to cite the provision of law that permits this.

He also claims that my blog “continues to cause problems” for the defendants. So I have asked him for the exact language and relevant information about this language — who the author it, when it was published, etc.

And as to his claim of “threats,” I’ve asked for documentation of the specific language of these threats. I’ve also pointed out that referring to previous productions of documents isn’t going to cut it in light of the concealment of past documents, including the infamous defamatory one from Kelly Gable, which perjuring priest Bob Malm forwarded to Shannon Johnston, adding a lie about the timing of my arrival at Grace Church.

I’ve also filed a copy with the court, as I think it’s important to see the various fabrications coming from Grace Episcopal Church and perjuring priest Bob Malm.

The fact that the lies continue also tells you that Grace Church remains every bit as toxic and un-Christian under Anne Turner as it was under perjuring priest Bob Malm. Even in federal court Grace Church doesn’t have the integrity to tell the truth.