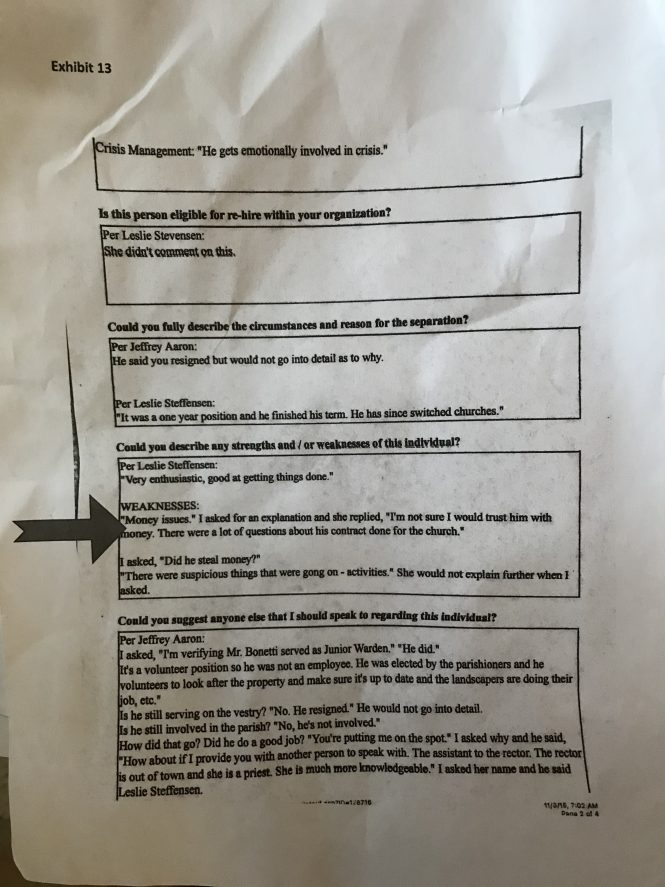 Having served as junior warden in 2014, which covered the flood in the church undercroft, perjuring priest Bob Malm’s accident, and the failure of the HVAC system due to substandard work during the 1994 renovations, you’d think I’d get some degree of courtesy, wouldn’t you?

But as evinced by the attached statement Leslie Steffensen gave to a background investigator, that’s not the case. Far from it.

In her comment about “his contract done for the church,” Leslie appears to be referring to AES, the HVAC company I brought in to replace the incumbent, which not only didn’t do commercial systems, but had repeatedly screwed up Grace’s HVAC system due to its inability to manage the control system.

Most importantly, any jack rabbit with even basic business experience knows that, both as a matter of good governance and as a matter of basic respect and courtesy, if you think you are being overcharged or there is a problem with the underlying bidding you address it then and there, face to face. You don’t address it via a whisper campaign.

The fact that Leslie thinks it’s okay to run her mouth to third parties, when she doesn’t have the integrity to discuss the matter face to face, illustrates why third parties routinely refer to Grace Church as “loathsome,” “disgusting,” “appalling,” and “disgraceful.”

And while I might be inclined to cut the church some slack if this were the only time we’ve seen behavior like this from the church, the church’s decision to try to subpoena my mother, in violation of state law, even as she was dying; Bob Malm’s perjury; Sugarland Chiow’s fabrications; the behavior of Lisa Medley, Lucy Medley, Kelly Gable, and Alison Campbell; all show that this sort of behavior is woven into the very fabric of the church. Then, like any good narcissistic organization, Grace Church turns around and loudly announces itself welcoming and inclusive, even as it bloviates about the baptismal covenant.

Needless to say, with so little respect and personal integrity coming even from Grace’s clergy, my reaction is, “No thanks. You can keep it.”