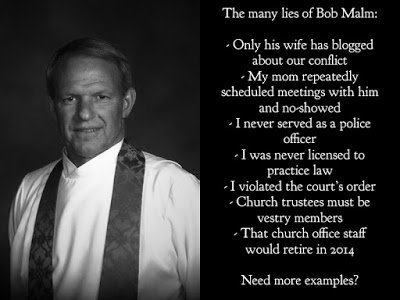 Perjuring priest Bob Malm is getting further and further out on the thin ice, thanks to his untruthful answers in pre-trial discovery.

Earlier today, I reminded defense counsel of his obligation under Virginia law to update discovery responses if they are later found to be inaccurate. With that in mind, I also provided a copy of perjuring priest Bob Malm’s facially inconsistent comments regarding his claim that my mother, or someone purporting to be her, contacted him repeatedly. Malm also has stated under oath on multiple occasions that he did not make any untruthful or false statements in conjunction with this matter.

Thus, this is his opportunity to come clean and admit he has lied repeatedly, as clearly evinced by his written statements under oath.

Will he do so? Doubtful, as Bob Malm is the, um, spineless wonder.

But whatever perjuring priest Bob Malm decides to do, he should tread wisely in light of the looming possibility of criminal charges. Nor is perjury a minor thing; it is a felony under state law, and we’ll soon be examining perjuring priest Bob Malm’s veracity under federal law, in light of the court case filed against him in federal district court.