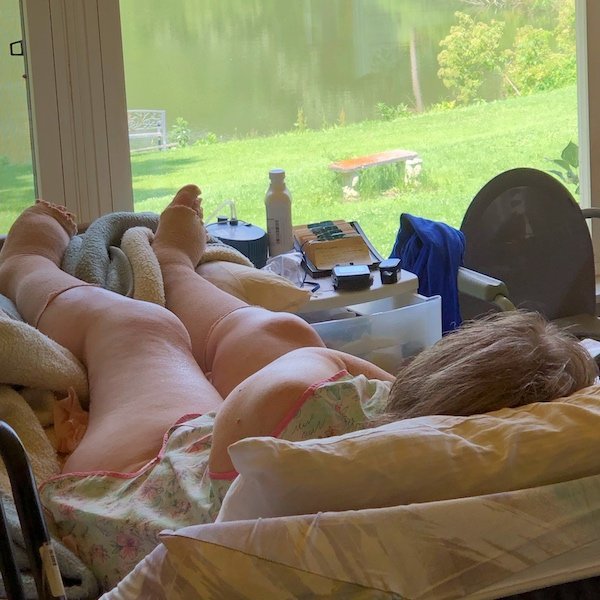 In many ways, Grace Episcopal Alexandria, the clergy perjury parish, has become like racism in our society.

For far too many years, white liberals have tried to pretend that we dealt with these issues years ago, even as people like Breonna Taylor are gunned down by white police officers in their own homes.

And in doing so, whites, including in the Episcopal Church, look around and say, “Well, I’m not a racist,” even as they ignore the issue and head off the Shrine Mont to get s-faced. So no one’s responsible, which means everyone is responsible.

And just like society now needs to say her name for people like Breonna Tayler who died due to the systemic racism in American society, so too does Grace Episcopal need to say the name of my mother, Sigrid, and others it has hurt due to its systemic narcissism and hatred.

Of course, right about now, there are a significant number of folks from Grace who will have their knickers in a knot, saying “How dare he. This is a friendly place, where we worship God and serve our fellow man.”

The reality is that today’s annual meeting is, if not a call to Jesus, certainly a wake up call for many. Major budget cuts are in place, and there is nothing to suggest that the downward trend will not continue.

This is not due entirely to the pandemic. One-third of pledging units had already fled the church before the Pampered Prince of Perjury, Bob Malm, decided the waters were getting too choppy to continue sailing.

Bob’s departure should have surprised no one. Bob was obviously burned out and had stayed far too long even before the vestry made the stupid decision to gift him $100,000 of parish funds, which were attributable to the interest on the loan the church made to Bob to buy a personal residence. That gift was conditioned on perjuring priest Bob Malm staying with the parish for another five years, and paying the other half of the debt off during that time. If nothing else, five more years of Bob’s feckless performance was not helpful to anyone.

And while the original loan agreement between the church and perjuring priest Bob Malm called for deferred interest (a stupid proposition to begin with), anyone with half the sense God gave a goat would have made payments on the loan, versus the month-long vacations to the beach every summer, the private schools, the endless rounds on the golf course, and the other indices of living life large, Malm style. If nothing else, the deferred maintenance on Bob’s home made it very clear to even the casual observer that the loan would not be readily repaid from equity; one simply cannot ignore painting and other routine maintenance and think the place will retain its value.

Nor was spending one out of every five dollars coming in the door on perjuring priest Bob Malm’s outrageous salary warranted. While Bob made sure the good times rolled during his tenure, he showed no interest in supervising staff or building maintenance, or even basic indices of good financial management, like the finance manual required by church canons.

Speaking of finances, to this day no one has ever explained why deposits were regularly showing up at the bank in amounts other than what had been counted, This went one for many years, and Bob was well aware of it, but did nothing. Nor do we have any explanation of the thousands of dollars in cash and stale checks that turned up in Charlotte’s office when she left.

And for the record, every indication has pointed to looming financial issues for a very long time. Indeed, in 2014, I modeled the church’s finances over the past seven years, comparing projections and actuals on both the revenue and expense sides, as well as the timing of both.

As I told Bob repeatedly at the time (only to be angrily brushed off), every steady-state model showed the church unable to pay its bills in the summer of 2017. With incremental tweaks, including cutting one office position, the church could make it to the summer of 2020 before things got really ugly. In fact, as I told Bob, my best estimate for D-Day was July 2020, as that appeared to be the date in which no amount of iterative budget cuts would allow the church to continue to pay expenses from income. (That date was determined by the fact that giving slips in the summer, so the church needs sufficient cash receipts from January through June every year to cushion monthly deficits during the summer.)

For the record, I also pointed out to Bob that the only person to whom parishioners likely would pay attention was him, and 2014 was none too soon to start socializing these issues and planning for the future. You already know how that turned out.

And yet, even as all systems were at red alert for a looming financial crisis, the church was drawing on savings to contribute $3000 to a going away party for Chris Byrnes. It was ignoring my repeated warnings that the HVAC system was failing, even as vestry members bitched about the cost of trying to keep things going. And as it approved the $100,000 bonus for perjuring priest Bob Malm in 2014, almost at the same time it cut health benefits to employees already not paid a living wage, all in the name of a balanced budget.

Nor was Bob’s tenure marked by integrity. Whether it was his lie, “Don’t worry about it, they’ll be retiring this year,” to avoid addressing problems in the church office (I was not the only person to whom Bob Malm told this lie; he also used it on Phil Smith), his myriad lies under oath in his conflict with me, or his fun and games in trying to prevent executive committee members from having access to detailed financial information, perjuring priest Bob Malm was and is a hot mess when it comes to personal integrity.

But most toxic of all was perjuring priest Bob Malm’s narcissistic construct, in which folks could bully others, lie, engage in group bullying (called mobbing by professionals) and more, all without seeing any conflict with their professed Christian values. Indeed, this is a church that even lies in its courtroom pleadings, with claims of domestic terrorism, fake places and events (think a church shooting in Sugarland Texas), and more.

And while the Lisa Medleys of the place bemoan the ongoing collapse of Grace Church, they don’t see that their conduct has anything to do with it.

Instead, I give folks like perjuring priest Bob Malm, Sugarland Chiow, the Princess Porcine, Motormouth Gable, Alison Campbell, Jan Batsnot Spence, and several others full credit for acting like horses’ asses, and for the ensuing results. As things stand, Grace Church is dying, and with good reason.

Even richer is the notion, in this day and age of Yelp and other social media, that I have some obligation to not share my experiences. Sorry folks, when you commit perjury, bully people, push my husband out of the church, defame me, subpoena a dying woman in violation of state law, and more, you can be reasonably assured people are going to talk. I certainly will. And having blogged for many years, even prior to darkening Grace’s doors, it was a safe bet I would continue to do so.

Nor will I be silenced. If we resolve our conflict, I certainly will tell people that’s the case, but I am certainly not going to go through life covering up the fact that Bob expressly pushed Mike out of the church, or tried to drag a dying woman, incontinent and reliant on oxygen, into a courthouse for depositions. People need to know that’s the sort of BS that goes on at Grace. After all, do you really want people joining the church on false pretenses?

Even then, you get people like Jean Reed, who bloviate about how I’m defaming Bob Malm and the other “servants of Christ” at Grace Church. But real servants of Christ don’t do the things identified above, and perjuring priest Bob Malm’s lie under oath is readily verifiable. Just ask him for any evidence to support his claim that Mom or someone purporting to be her contacted him repeatedly. He has none. And now he’s admitted that and claims that Sugarland Chiow is the person behind that lie. And yes, I have the court transcript to prove it. In short, concluding that Bob is a “servant of Christ” based solely on faith, even when the evidence suggests a different conclusion, is just silly. And folks at Grace don’t even have the integrity to see for themselves if Bob’s claims are true.

Still better have been the times when I’ve been protesting, carrying a sign about how Grace tried to drag my mother into court, only to have folks like Amy Medrick roll past and flip me off. Or the Princess Porcine. With that sort of immature behavior, is it any wonder that Grace is imploding?

But the single biggest factor that proves that Grace Church is toxic is the very fact that it is collapsing. If Grace Church is such a slice of paradise, why did one third of its pledging units leave even before perjuring priest Bob Malm hit the road? People aren’t stupid, and they’ve been leaving the church for years now.

So, with today being Candlemas and the parish annual meeting, I invite members of Grace Church to say her name, Sigrid Yahner, in memory of the dying woman, dealing with a profound anxiety disorder and slowly suffocating to death, that it tried to subpoena in violation of state law.

And while members are doing that, they should say the name of the thing that is killing Grace Church: Narcissism.

Maybe fit it in around the discussion of Grace’s budget.