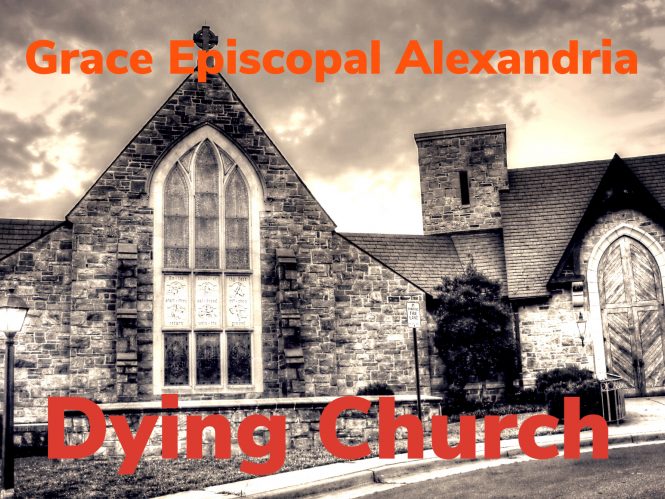 You have to hand it to Episcopalians—-they are masters at denial, equivocation, avoidance, and passive-aggressive behavior. It therefore comes as no surprise that the recent news from Grace Church is a masterwork of misinformation, misrepresentation, and empty triumphalism.

At the annual parish meeting, an annual balanced budget of $983,050 was announced. This reflects a net decline in pledging units to 166 as of this writing, a decline of 13 from last year’s total of 179. Meanwhile, repeated pledges increased in amount by almost 10 percent, totaling $732,357 as of January 27.

The response was predictable, with discussions centering around stabilizing parish finances, filling gapped positions, and more.

But the reality is that Grace Church remains in a dire way. It is a church that is dying.

First, let’s look at pledging units. Ten years ago, there were 324 pledging units. Today, there are just 166, a loss of 48.77%. That is bad news no matter how you parse it, and the average age within the parish means that further steep declines are all but inevitable.

Second, the church is not being transparent. For example, Evan Robinson is misinformed when he claims that the family ministry position was “gapped,” or left unfilled to balance the budget. It was defunded, and there was no choice in the matter, as the church simply didn’t have the money to pay for it. Thus, claiming that it was “gapped” is a bit of revisionist history.

Third, there’s a bit of gamesmanship going on with the pledge count. Parishioners have been told that there have been declines in pledges over the “last several years,” but the reality is that the declines extend back more than a decade. Moreover, the church claims that 34 new pledging units have been acquired, and that this reverses the recent decline in pledging units. Yet the net result is a further decline, and it would be highly unusual for new pledges to come in at the level of renewing pledges.

Fourth, while the parish babbles on about new staff positions (part-time, without health insurance, I might add), it continues to short the diocese pledge to pay for these positions. Meanwhile, the 2.03 percent of the budget devoted to local outreach is hardly reflective of a “center for outreach and healing,” even with restricted donations factored in. And this practice of “off budget” funding for outreach is hardly an example of best practices.

Fifth, the parish continues to play its usual game of ignoring inflation. Indeed, were it to have the same buying power today as it did in 2015, the parish would need a budget of $1,191,587.21. Thus, its current budget reflects a 17.5 percent decline over 7 years when adjusted for inflation,

Sixth, the church’s actions are consistent with those of a dying church. These include consistent declines in budget and attendance, difficulty in attracting quality candidates for open positions, fierce resistance to change, focus on the needs and desires of members, internal bickering, and remaining pledging units ramping up giving in an effort to stave off the inevitable. See, for example https://www.namb.net/church-replanting/resource/signs-of-a-dying-church/.

But most importantly we see so-called church “leaders” who, in the words of one observer, “Seem sane to themselves, but seem hateful and childish to outsiders.” These include Sugarland Chiow, Lisa “Princess Porcine” Medley, and Alison “Fluffy” Campbell. Not only are these people devoid of any real understanding of Christianity, but they have formed their own little echo chamber, where they think that their behavior is acceptable and appropriate. But Sugarland’s various courtroom fabrications and the other antics of these people are not okay.

Nor does the end justify the means. Trying to drag a dying woman into court with claims of “domestic terrorism” is morally repugnant, and would be categorically rejected by Jesus of Nazareth.  Moreover, the many lies of Sugarland and perjuring priest Bob Malm are proving toxic to the church over time. Any church that needs to lie to survive isn’t a church. It’s just a Greek social organization.

Nor is the church making any meaningful effort to grow. Art on the Avenue and a few signs on the lawn do not evangelism make, and the church has no notion of how to grow, or even a notion that it should grow. Nor does it have any strategic plan.

In short, Grace Episcopal remains rotten at its core. And while Anne Turner is making great efforts to drain the cesspool that is the church, decades of moral filth cannot be readily fixed.

Let me be clear: Grace Episcopal Alexandria is dying. Anyone who pretends otherwise is living in a fool’s paradise.