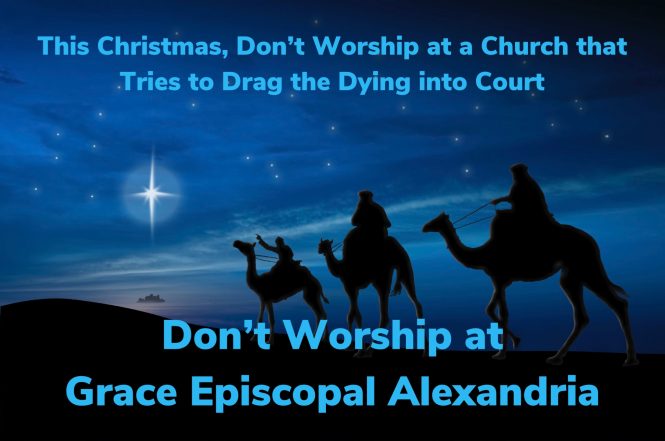 It’s another courtroom Christmas for Grace Episcopal Alexandria , the clergy perjury parish. That’s thanks to perjuring priest Bob Malm, who rejected a settlement offer in the Massachusetts litigation against him that I made several weeks ago.

I made that offer through litigation counsel several weeks ago, and while I will not provide details, it offered no downside to the Perjurer in Chief, Bob Malm.

Why did I make the offer? Primarily because I thought it was the right thing to do, given that it was Advent.

But perjuring priest Bob Malm’s faith is all about appearance and impression—there is no substance to it. That’s demonstrated by his repeated lies under oath, his courtroom fabrications, his bullying, and his lack of concern over the harm he is causing to Grace Church. That’s the case, even as the parish’s unbridled clericalism led it to name part of the building after him.

That of course illustrates the why the Episcopal church is dying: Because all its efforts focus on doing church, versus being church. And Grace wallows in its own narcissism and sense of entitlement — even as St. John the Divine and the National Cathedral closed for Christmas in order to protect others, Grace insists on holding in-person services.