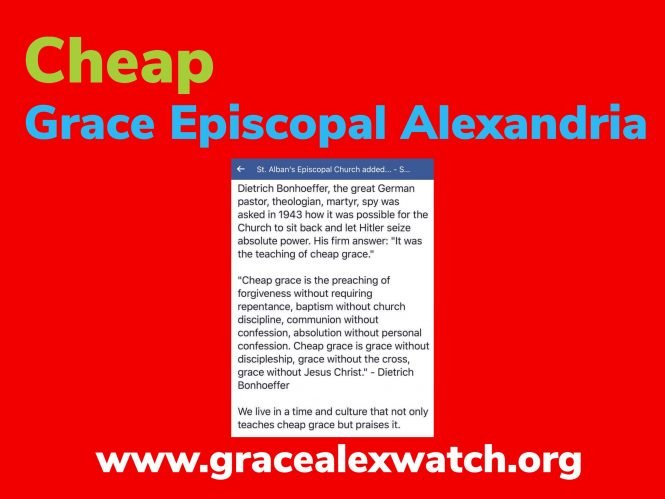 I recently learned of Anne Turner’s plan to preach on the topic of pain and healing. Good move, but she is missing the larger point.

Most importantly, issues at Grace far predate the pandemic. Indeed, shortly after perjuring priest Bob Malm’s accident in 2014, a number of parishioners left, upset by behavior within the altar guild.

Similar issues came to the surface in the choir and vestry.

But even there, the issues had been around for a long time. Blind adulation for Bob Malm, with no recognition of his feckless conduct as rector, his bullying behavior, and his questionable veracity — including repeatedly telling vestry members, “Don’t worry about it. They’ll be retiring this year,” when they attempted to address problems in the church office — led to a parish with very skewed values. And as I have posted before, the problems have long been recognized by outsiders, including one local Episcopalian, well familiar with the parish, who says she would never be a member of Grace church due to the way people talk to each other.

Moreover, Grace thrives on cheap grace. Behave like a total ass? Just say I’m sorry and feel free to do it again. Or be like Bob Malm, pull a DARVO (look it up), and tell folks you’re a victim of domestic terrorism. You’ll get plenty of help from Sugarland Chiow and the other jackasses who claim to be “leaders.”

To make matters worse, the blind adulation for perjuring priest Bob Malm and organizational narcissism, combined with the departure of the Perjurer in Chief and the advent of COVID, as well as Michael Guy’s lackluster time as an interim, have added layers of problems to the underlying issues and further trauma.

So, Anne’s sermons are not a bad idea, but absent a much deeper dive and a wholesale cleanup of the sewer that is Grace Episcopal Alexandria, this dog ain’t gonna hunt.

BTW, on a related note, let me add yet again: Holding Shrine Mont in the midst of a surging pandemic is just plain stupid.