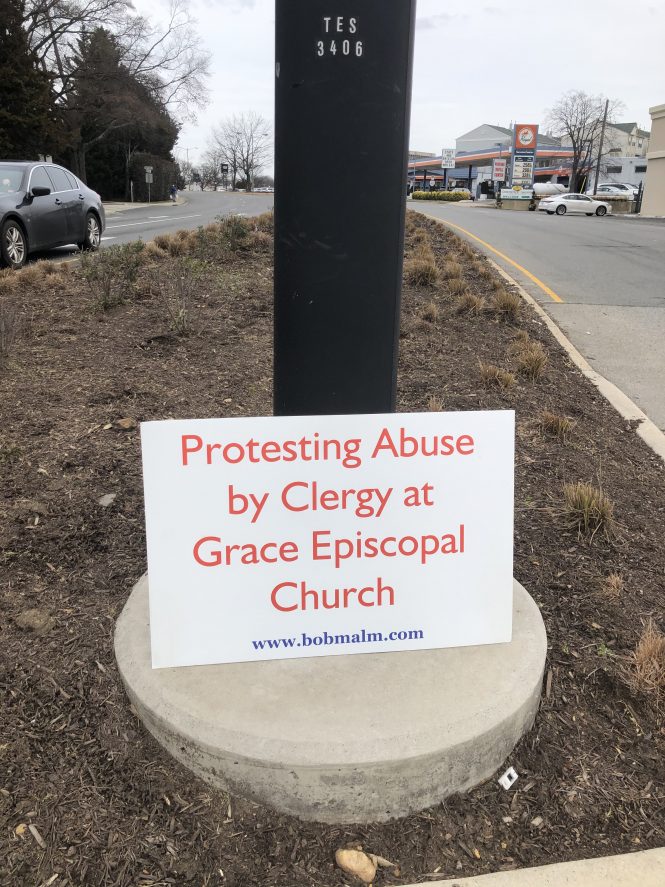 Earlier today, I spent an hour or so protesting at the corner of King and Quaker Lane. It’s a great spot due to the high volume of traffic coming from DC as well as the Route 7 feed into the city. The spot also was named “Dysfunction Junction” by perjuring priest Bob Malm, no doubt as a concise statement of his commitment to living out the baptismal covenant, one lie at a time.

With this being Lent and the return of relatively warm weather, this seems like a good time to step up protesting in Alexandria. After all, who would deny the denizens of Grace, aka the Malmites, the opportunity to do a little repenting amidst all those badly made pimento cheese sandwiches and the boring lecture series?

And of course with Easter coming, the annul celebration of rebirth and resurrection, this is a time to remind folks that there’s nothing even remotely Christian about Grace Church. Yes, it says it’s a church, but that is like saying that Donald Trump is a politician. Yes, Grace occupies that role, but as a place where the rector commits perjury, where the church repeatedly conceals evidence during litigation, where Sugarland Chiow makes false statements of law and fact to the court, where the church tries to drag a dying woman into court in violation of state law, where Kelly Motormouth Gable goes around falsely accusing people of embezzlement, and more, there is zero real-life truth to the matter.

In other words, if you’re looking for a place to worship this Easter, do yourself a favor and take a pass on the hypocrisy of Grace Church. And while you’re at it, don’t throw good money after bad. After all, this is a church so fabulously wealthy that it pays the rector $100,000 bonuses.