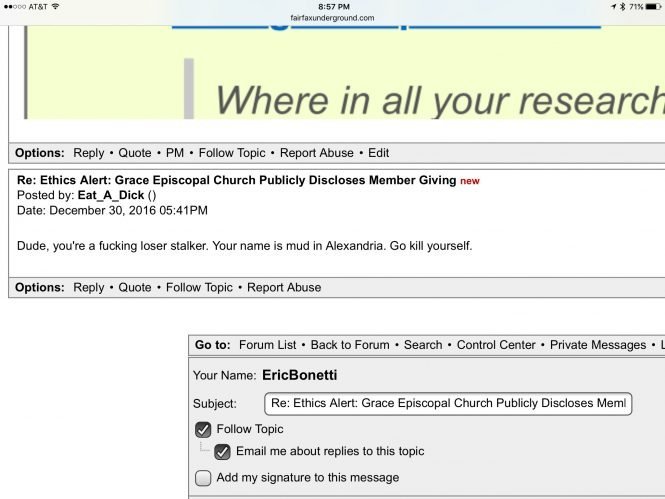 With motions court set for tomorrow, there’s an important reminder for Grace Episcopal Alexandria, the clergy perjury parish. Specifically, no matter what happens tomorrow, in the end the church cannot win. It will not win. There is no fact pattern in which it wins.

Indeed, if the court buys the church’s arguments tomorrow and dismisses my case, two things will happen:

And if I lose on appeal, it will be just that much more to blog about.

The facts speak for themselves:

Moreover, the church has nothing I want:

So the church had better hope that at some point we find enough common ground to decree a lasting ceasefire, for it continues to shed members and pledging units like fleas off a dog, and with good reason. That good reason is its own bad behavior and that of perjuring priest Bob Malm.

But as things stand, the church has absolutely nothing of interest to me and I have zero interest in backing down.

One final factoid that underscores the dilemma facing the church:

My great-grandfather was a well-known minister in Germany during World War II. In a sense he was lucky, for despite the economic ravages of the time, his position was funded by the American church.  And at a time when many feared speaking out against the Nazi party, my great-grandfather preached against the party, against Hitler, and against the atrocities of the regime. Each Sunday, every Sunday.

And every Sunday, he was taken away following services, to be interrogated by the Gestapo.

And sure enough, the following Sunday, the cycle repeated itself.

Finally, knowing that my great-grandfather was too prominent in the church to be jailed or murdered outright, he was conscripted and transferred to a part of the front that was collapsing in front of the advancing Soviet army. He was captured and is believed to have died in one of the so-called silent camps, although some records suggest he may have died in Paris after the war. To this day the details are unknown.

The upshot is I come by my stubbornness naturally.

If nothing else I can outlast Grace Episcopal, the clergy perjury parish. And I can outlast perjuring priest Bob Malm’s lies, defamation, and other antics.

Of those facts one can be assured.