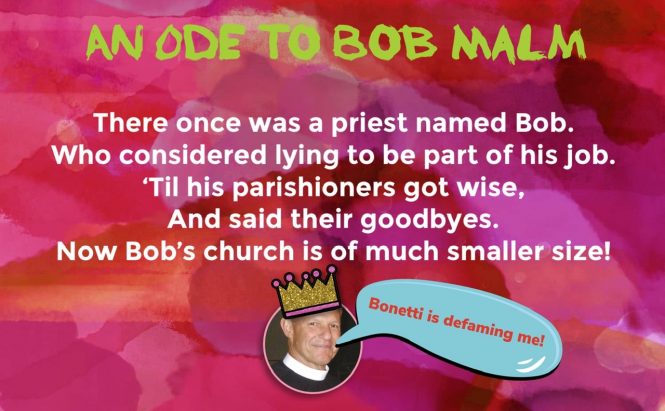 It’s official. What I have been saying for several years now, which is that the Episcopal Church stands at a crossroads and must fundamentally change itself, is now being echoed by ++Curry.

In a meeting of the Union of Black Episcopalians, African-American members, Curry acknowledged that tinkering around the edges won’t cut it. The church, he said, must pursue revolution, not reform, if it is to survive. Specifically, it must pursue a revolution in its values, both inside and outside its walls.

Predictably, Curry was primarily referring to the church and race, including the fact that black church members seem to do most of the work to address racism.

But I think it’s becoming increasingly clear that it goes far beyond that.

It’s simply laughable that Susan Goff and other Episcopal bishops can say, with a straight face, that Bob Malm’s perjury only is actionable if there are criminal charges. It’s laughable that perjuring priest Bob Malm can utterly disregard the parts of his job he didn’t like, including supervising staff and making sure that the church is a safe place for all persons. And on top of that, that Grace Church would pay a loser like Malm $200K a year, give him a month off to park his fat butt at the beach every year, and then pay him a 2014 bonus of 100K — even as it didn’t have the money to pay for overdue HVAC and other deferred maintenance.

Nor were Bob’s ethics up to snuff. For example, over the years he repeatedly lied to vestry members about the status of church office employees, saying “Don’t worry about it. They’ll be retiring this year.” He told that lie to Phil Smith when Phil served as junior warden, and Bob Malm told that lie to me as well. Any priest who can’t even tell his vestry the truth is a pretty damned sorry excuse for a priest, and you can quote me on that.

Will the Episcopal church get its act together?

Doubtful. Remember, the definition of insanity is doing the same thing over and over, and expecting a different result. And we’ve seen the same reports, the same recommendations, on the same topics, for decades now. No one takes responsibility.

Nor are things any better at Grace Church. Bob Malm commits perjury, and the parish names part of the building after him. Thus, Bob Malm is a loser, and so is the parish, for supporting a priest who engages in criminal conduct.

Same for internal dynamics. Some of the worst bullies in the church are the ones who talk the most loudly about inclusion, how much they value other people (Linda Waskowiscz, here’s looking at you), and more.