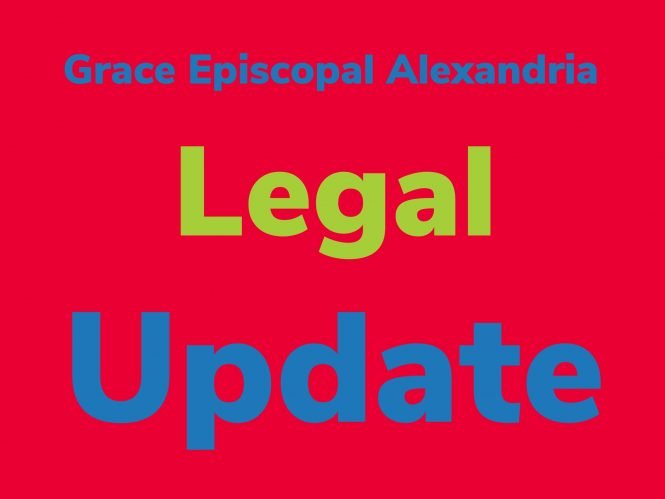 This will be a busy week, with two courtroom hearings set for Grace Episcopal Church.

In the first, the Alexandria circuit court will consider my motion for sanctions against perjuring priest Bob Malm for his evasive and dilatory discovery responses. That hearing is set for Wednesday.

Then, on Friday, the federal district court for the eastern district of Virginia will hear motions to dismiss by the City of Alexandria, Grace Episcopal Alexandria, and perjuring priest Bob Malm. The other defendants, including the Commonwealth of Virginia, St. Gabriel’s Marion, and the Episcopal Diocese of Massachusetts have not yet entered appearances.

I’m feeling pretty confident about things, but in the event I don’t prevail, there will be yet another appeal to the Virginia Supreme Court from the Circuit Court, as well as an appeal to the federal district court of appeals.

Meanwhile, things are humming along on other fronts. I’m awaiting notice on whether my appeal to the VA Supreme Court has been granted on the defamation case involving Kelly Motormouth Gable, perjuring priest Bob Malm, and Grace Episcopal. Service also should be complete in the next week or so on my petition for a Writ of Mandamus seeking disciplinary charges against Sugarland Chiow. And two court cases are chugging along in Massachusetts involving perjuring priest Bob Malm.