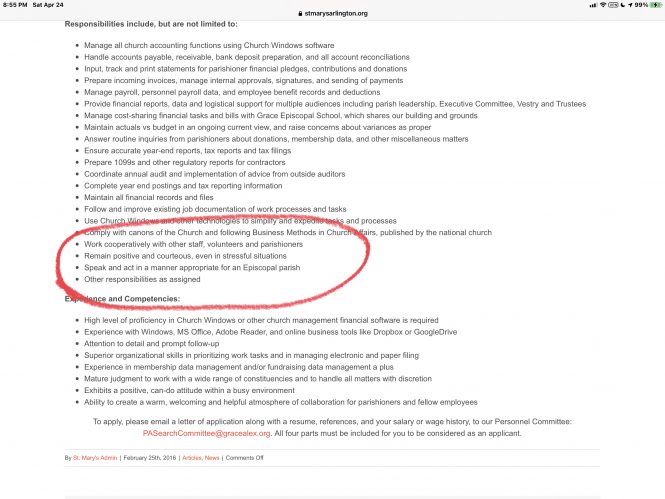 Grace Episcopal Alexandria, the clergy perjury parish, recently posted an ad for a temporary bookkeeper. Not only is this going to be an interesting slog, but there’s a wryly amusing side to it.

First, it’s not like working at Grace is a resume builder. Just think of the great interview questions at the next gig: Did Bob Malm really commit perjury? Why didn’t anyone put their foot down? Is it true that Bob Malm directed staff to misuse memorial donations? Did they really try to drag a dying woman into court? How many lawsuits are really going on?

Then we get the humor of the job description itself. “Speak and act in a manner appropriate for an Episcopal parish?!?”

Let’s see. Bob Malm’s perjury. His comment, in front of witnesses, “Why should I give a fuck?” Kelly Motormouth Gable’s defamation of me. Bob’s decision to force Mike out of the church. The deliberate misuse of memorial funds at Bob’s direction. A person known to have boundary issues with little girls. Doesn’t leave out much, does it?

Then we get the curious thing about facilities maintenance. Other than the HVAC project and Kris Hesse’s dutiful work outside, there hasn’t been jack diddly done around the building — at a time when the lack of use would make it easy to bang out projects, especially the inexpensive ones, like caulking, painting, replacement of photoelectric controls on the outdoor lights, and more.

And heaven only knows what Peter Hanke does with his time. Other than taking pictures of protestors, walking the foo-foo dog, and doing church bulletins for a limited number of services, there should be plenty of bandwidth to make recommendations and obtain bids on repairs and maintenance. Indeed, I have repeatedly fielded complaints from people who have asked to be added to church’s email lists, but nothing happens. Kinda hard to grow a church when you brush off persons who express interest in the place.

Moreover, it’s more than a little ironic that the job description talks about complying with church standards, when the parish has been ignoring diocesan standards for the prevention of COVID-19 transmission for months. As in the part about only being in the office for work that cannot be done remotely, and then for the briefest period of time. Or only a single vocalist, if there is any singing at all. Or the least number of people possible to stream services — typically a priest and a videographer, versus the 14 people Grace typically rolls out.

As to the position itself, the church would be far better paying a CPA. She or he would be more costly, but the church’s tendency is towards sloppiness and entropy in its business operations, and the parish certainly has not put its past behind it. Indeed, the more things change, the more they stay the same.

It’s also worth noting that while all good job descriptions are aspirational, the list of duties is pretty long for 15-20 hours a week. It’s also not considered a best practice to have the same person doing the financials as the membership database. Well-run churches typically have the parish administrator do the pledges and membership database, while the financial person does the bookkeeping. Otherwise, you run the risk of “ghost members,” or pledges that show on the books in amounts other than what was actually pledged. Thus, the financial person should have no ability to edit member records or pledges.

In short, while it is clear that EJ, Anne Turner, and a number of others intend to do better, at the end of the day Grace Church remains the same hot mess it’s been for the past more than 30 years. In short, its days are fast drawing to a close.