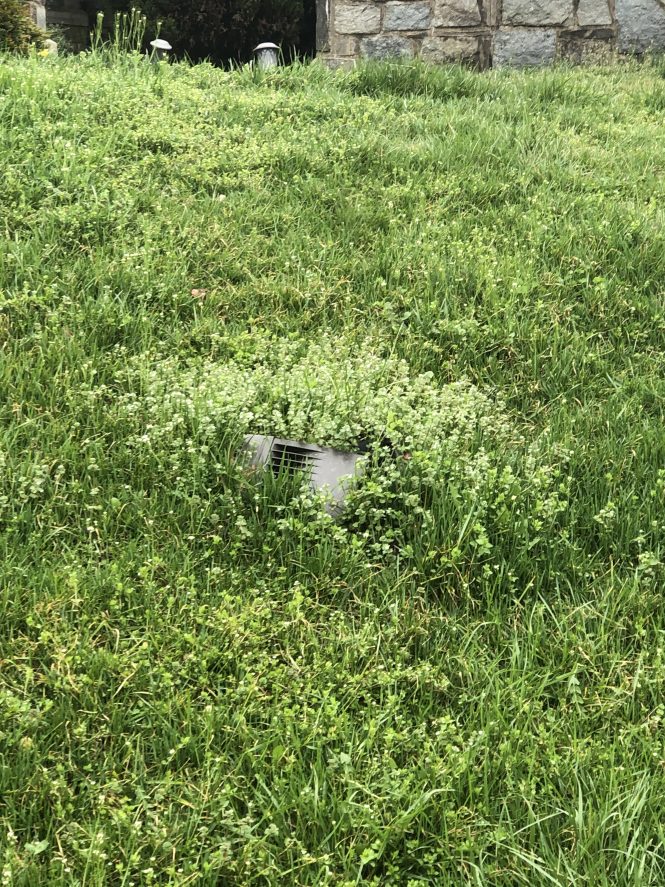 A quick look at the Grace Church property makes clear that the church continues to defer both preventive maintenance and emerging maintenance needs. These factors, combined with ignoring opportunities to implement costs-saving upgrades, spells bad news for the parish’s long-term finances. In addition, the shabby appearance of the church sends an uninviting message to prospective members.

Some of the issues are immediately obvious. For example:

And while Kristine Hesse has been doing a good job of weeding and sprucing up the outside, much more needs to be done.

While replacing fluorescent lights would not offer sufficient savings to warrant replacement, the HID lights on the parapets are profoundly energy-inefficient. Replacing them with LEDs would:

Similarly, replacing the incandescent bulbs in the sconces outside entrance doors would eliminate the need to replace bulbs in a regular basis.

As to the previously mentioned accessibility issues, at a time when society as a whole and the Episcopal Church are aging, it makes sense to ensure that the facility is open and inviting to all persons. This would require automated doors at several entrances, and at the bathrooms. And while the cost would be roughly $10,000 for installation on the two main entrances and one set of bathrooms, this is a small price to pay to ensure inclusion.

But most concerning is the lack of planning. To this day, there is no capital reserve study, as David Adams recommended back in 2014.

As a result, the parish has no idea what maintenance needs to be done, when it needs to be done, or what it will cost to have it done. (I paid out of pocket for a replacement reserve study in 2014, but declined to provide it to the parish when it was completed due in 2015 due to the childish and immature behavior of Alison Campbell and Lisa Medley. Far better to drop it in the shredder, which is exactly what I did.)

This means the church is flying blind, and there is no one on the vestry with the skill sets need to resolve those issues. What I can safely state is that the church is in far more perilous financial shape than it realizes, for there are a number of repairs that could surface without warning, much like the HVAC system, which the church ignored right up until it failed, with disastrous results.

Moreover, much like the minor leak under the front stairs, which could have been repaired for a couple of dollars when it first emerged, but cost $700 when the long-ignored wall failed, several of the issues — like the water leak in the tower, or the problems with the masonry in Merrow Hall — will cost exponentially more when they are fixed by virtue of having been ignored.

Of course, this lack of planning also speaks to the BS of Mary Stewart and others, with their claims that the church has been careful with its funds. Anyone with even basic non-profit financial literacy realizes you cannot be careful with your money when you refuse to engage in the planning needed to forecast your future financial expenses. And the egregious waste of the Malm years, when one out of every five dollars went to a feckless perjurer, the parish paid Malm a $100,000 2014 bonus, funds were drawn from savings to pay for things like Chris Byrnes’ farewell party, and thousands of dollars of cash were found loose in the parish administrator’s office, makes it clear that this is a church with serious governance — and yes, cash management — issues.

My advice to anyone considering joining Grace Church is to approach with great caution. This is an organization with a long history of misfeasance and nonfeasance when it comes to its facilities and its finances, along with really bad behavior by its rector and members. And there is no sign that the church has done anything to improve its dismal track record, particularly when it comes to managing the physical plant.

In fact, Peter Hanke would be well advised to stop spending his time taking photos of people legally exercising their First Amendment rights outside the church, and more time being parish administrator. There is no reason why an imminent electrical hazard, like that in front of the main sign, should be unrepaired eight months later.

And by the way, let me be the first to say it: Absent dramatic and immediate changes, the church can no longer afford its physical plant. Indeed, with more than $300,000 in accrued deferred maintenance, and more piling up, the church needs to start thinking about cutting its losses and moving to a less expensive church building.