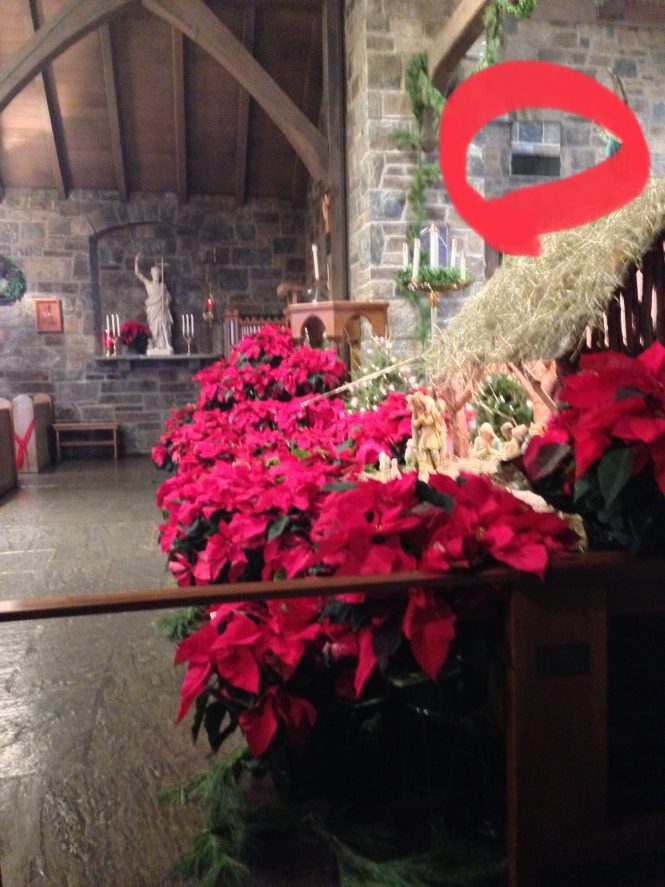 Earlier today, I was rummaging around through photos of Christmas past. There are a lot from my years at Grace Church.

Last night, the church was largely empty, as it likely will be this Easter.

But I particularly liked the irony of this photo, for it shows the tromp l’oeil I commissioned to replace the ugly plywood someone had shoved in the hole in the masonry above the chancel door when the return air duct was previously downsized.

And that is the Christmas message as lived out at Grace Episcopal Alexandria: As long as you are useful to the place, you are welcome. With, as Leslie Steffensen would put it, “open arms,” no less.

But if you criticize the church or rector — a place where money goes missing with no explanation or accountability, where the rector lies under oath, where the church tries to drag the dying into court, and where vestry members go around behind your back falsely accusing you of embezzlement — Grace Church calls you a domestic terrorist and more.

So, this Christmas, if you are looking for a church, look for one where people try to live the promises they make every Sunday. Yes, we all fall short, but that’s not the same as utterly disregarding the baptismal covenant.

It’s not the same as the Episcopal Diocese of Virginia and Susan Goff, which say in writing that clergy misconduct is okay as long as criminal charges aren’t brought.

It’s not the same as supporting a church where the rector has such low moral standards that he commits perjury in court.

It’s not the same as supporting a church where perjuring priest Bob Malm thinks it’s okay to try to force my husband Mike out of the church just 16 months after being received into it. (Ain’t it great to know that attendance at the church is so strong that the rector can tell people people they are persona non grata?)

Instead, look for a church that manifests God’s love for all people, all the time, in all places. Or as the Rt. Rev. Barbara Harris put it, where people care for “the least, the lost, the left out.”

And do yourself a favor: Avoid Grace Episcopal Alexandria, the clergy perjury parish.