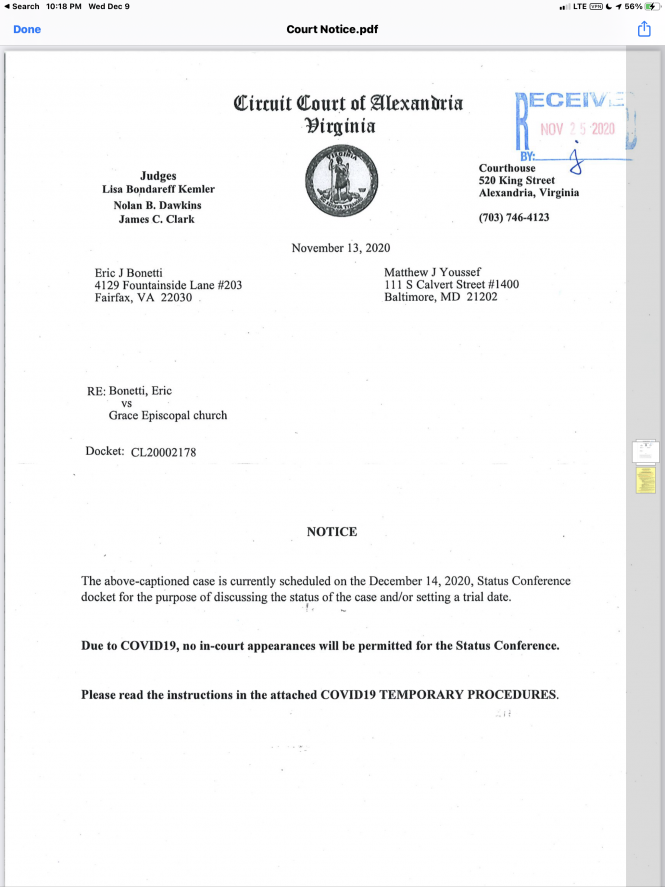 Earlier today, defense counsel and I received notice from the Alexandria Circuit that it wants to hold a pre-trial conference on or before December 14, 2020 in both the case against perjuring priest Bob Malm and the case against Grace Episcopal, the clergy perjury parish. My suggestion is we do Friday morning.

In this day and age of COVID-19, the meeting is a teleconference with the judge and representatives of both side. I have cautioned opposing counsel that:

During the call, I also plan to remind defense counsel that Grace Church’s biggest problem isn’t legal. The problem actually is the ongoing public relations meltdown in the church, marked by Bob Malm’s lies and perjury, Sugarland Chiow’s conduct, the church’s efforts to drag a dying woman into court in violation of the law, its defamation, its fraudulent concealment of evidence, and more. In short, Grace Episcopal is ethical trash.

And while the doors of the courtroom may be open several hours a day, five days a week, the court of public opinion is open 24/7, 365 days a year. In the latter, Grace Church is losing, and losing badly.

In the meantime, any denomination that thinks clergy perjury is okay absent a conviction is morally bankrupt and just needs to close its doors.

The sooner that happens, the better.