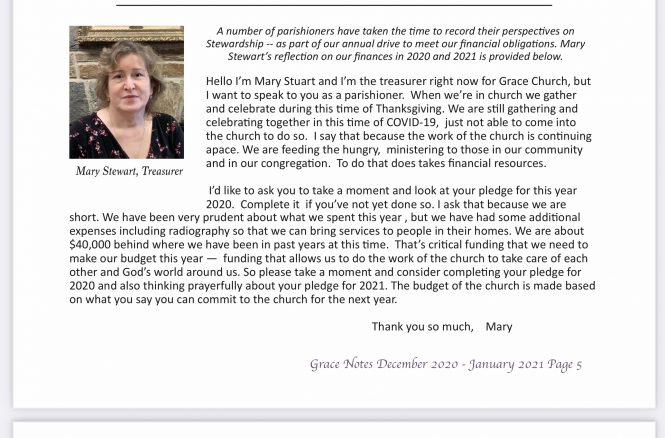 As I was reading the December/January edition of Grace Notes, I was struck by the financial comments from Mary Stewart. My concerns covered several areas.

First is my usual bugbear. Every year, the church talks about how it’s careful with its money, when it is not. We can leave to one side my oft-expressed concerns about Bob’s Malm’s compensation package, or about paying him a $100,000 bonus at a time when the church was cutting health benefits to employees. More important is that the church still has at best a dimly formed notion of preventive maintenance and its connection with predicting future cash flow needs. As a result, it spends much more than it needs to for repairs, while flying blindly into the financial future.

The classic example from my time as junior warden was when part of the basement wall collapsed. For those not familiar, the area was under the front steps. There had been a small leak there for many years, but folks simply ignored it.

Never mind that one of the results was rampant mold in an air-handling room.

Never mind the high mold levels in a room right next to the children’s chapel; the black mold in question is highly toxic and a known carcinogen.

Never mind the rusting of the HVAC equipment, or the periodic minor flooding.

The matter was simply ignored.

That’s a shame, because less than a dollar of hydraulic cement would have ended the problem.

So what did it cost when the wall collapsed? Thanks to using the original mason who is or was still around, we got a pretty good deal and had the work done for $700. And in true Grace fashion, folks behind the scenes complained about the expense, never realizing that the church’s own negligence had turned a trivial repair into a major project.

Similarly, I and others were noisily warning that the HVAC was failing. But instead of heeding the warnings that the system was well past end of life, folks tried to ignore the issue away. Indeed, after the line rupture outside the library, folks insisted on running the system without removing  debris in the lines, contrary to the warnings that doing so would result in failures throughout the system. And sure enough, multiple air handling units failed in Merrow Hall and elsewhere. That in turn led to bidding on a replacement system after the system had failed — which is never conducive to effective procurement. Nor is it smart to borrow money when you can instead save it.

There are myriad additional examples, but it’s fair to say that if the church were any other kind of non-profit, it would get a D for its financial management. Just being careful in what you spend isn’t enough—you need to forecast, to save for the future, and know what your anticipated capital expenses will be. Nor does the church have nearly enough liquidity in its unrestricted assets. It should have, at a minimum, 3-5 months of operating expenses on hand in the form of cash investments, or about $500,000. And no, that does not mean raiding restricted funds, which would be illegal.

My second issue is the scattershot nature of information about the church’s finances.

Mary’s saying that the church is running about $40,000 behind past years at this time tells readers nothing and causes more confusion than anything. 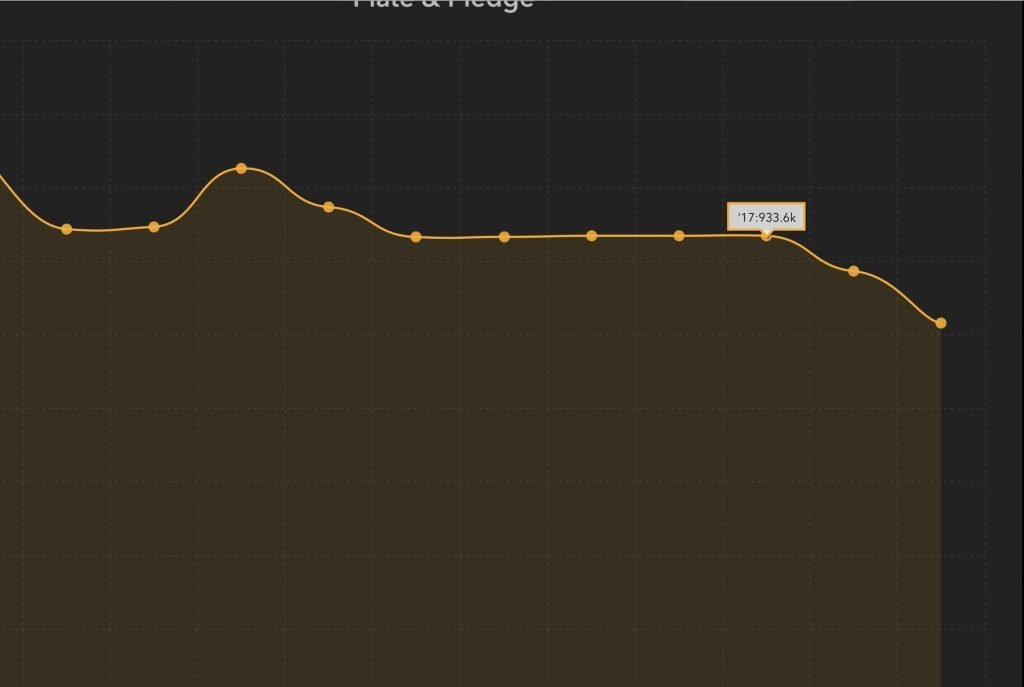 Official denominational reports show precipitous decline in the parish’s pledge and plate income over the past two years, with 2019 income dropping to $816,100 — a 12.59% decline in just two years.

Is the issue on the income side? On the expenses? While Mary says the church has been careful with its spending, she also cites a number of additional expenses, including a curious one about radiography. On the latter, it appears that she’s referring to audiovisual expenditures, versus medical imaging.

If the issue is with income, which is likely the case, what area of revenue has shifted? It is pledges, or plate, or both?

And what does she mean compared to past years? Last year’s income was down significantly, and when adjusted for inflation, the church’s budget has been falling steadily for years now, and likely will continue to decline. So what is the baseline to which she is referring?

Nor is she particularly clear on whether her “ask” is for 2021 pledges, or for completing 2020 pledges. Neither is looking great right now, and dwindling attendance at the church’s online services, now routinely less than 100, does not bode well for the future. Nor are donors likely to find it reassuring when they learn that Bob Malm felt he could force people out of the church with whom he had a falling out.

Why would anyone want to give sacrificially if all it takes is one argument with the rector to lose one’s investment? And if Bob can afford to push members out, then clearly the church is doing just fine financially. Same for the $100K bonus it paid him in 2014. Any nonprofit paying $100K bonuses sure as heck doesn’t need my money. Nor does it need your money.

Nor do Mary’s comments offer any indication of whether the church expects to get its usual year-end gifts of appreciated stock. (Speaking of, in past years the church didn’t even bother to keep the church office open on New Year’s eve, nor did it tell anyone that it would be closed.)

As a result, at least one big end-of-year gift went elsewhere when the donor discovered that she/he could not get a receipt dated 12/31 because the office was closed on that day. That’s really poor management.

And the church should make sure that it lets people know how to make end-of-year donations during the week between Christmas and New Year’s. Yes, things may be slow at the office, but there are lots of folks who get dividends, bonuses, etc., during the final days of the calender year who may be willing to make an end-of-year donation. In fact, for most non-profits, there’s a huge push to bring in year-end donations as folks work on their taxes. But not at Grace. In fact, the church is largely indifferent to that aspect of fundraising.

As for financial reporting generally, church members should see, at a minimum, monthly information on income, expenses, capital expenses, and anticipated cash flow needs. You can’t keep this stuff secret — effective stewardship requires transparency and accountabilty, both of which have been sorely lacking at Grace for years. In fact, the church should have a one page financial summary in each month’s edition of Grace Notes. A brief blurb from Mary simply doesn’t cut it. And some well-run churches actually publish their weekly income and expenses, thus creating a sense of urgency. Not so Grace.

There also needs to be discussion about pledging and who pledges what — possibly via an outside consultant, who can maintain confidentiality while analyzing giving patterns. (The church surely doesn’t need Lisa Medley going around posting information on people’s giving to social media, especially when she can’t even get her details straight.) The reality is that a huge portion of the church’s budget comes from just a few families, all of whom are older. Loss of even one of those pledging units will spell serious trouble for the church. Yet, true to form, Grace is going to ignore that issue until it suddenly suffers a major budgetary hit. I can all but promise you.

It also would be a great idea to have a wish list for donors. Many churches do, and it’s not unusual for folks to fund requests anonymously, or in memory of loved ones.

And for the record yes, I get the bit about helping neighbors, etc. But that only gets you so far if you can’t pay your bills.

And there’s still a baseline, structural problem with the parish, which is its organizational narcissism. Until it deals with its own misconduct, including trying to drag a dying woman into court in violation of the law and Bob Malm’s courtroom perjury, Grace Church will continue to see its fortunes decline. Nor will Kelly Gable’s defamation do anything to improve that situation. She may think she can discredit people with her vile gossip (made after “fairly intensive prayer,” according to her), but people sooner or later know that dog ain’t gonna hunt.