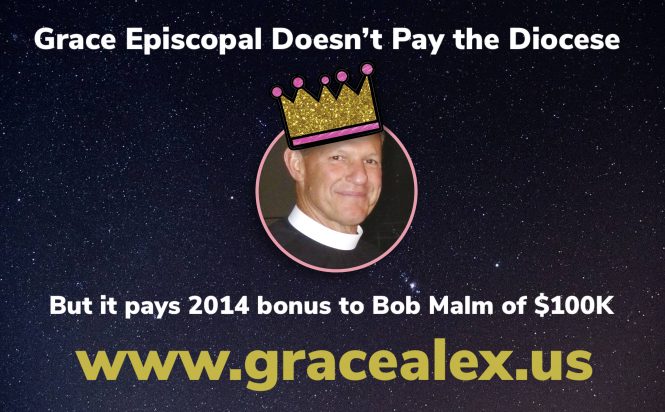 Remember when I posted the article about warning signs that a church may be at risk of closure? The article, written by the Rev. Thom Rainer, lists one of the warning signs as resources being focused inward, versus outward.

And so it is with Grace, particularly in the case of the parish’s annual pledge to the diocese. Specifically, for many years, the amount pledged has been less than one-half of the amount proscribed by the Virginia Plan, the diocesan proportional giving plan. That’s right—less than one half.

The Virginia Plan and NOI

So what is NOI? Simply put, it’s all income that is used to pay operating expenses, and it includes items that are funded off-budget, like music programs, the altar guild, and EYC mission trips.

The diocese of Newark provides a good definition:

In other words, NOI is pretty easy to calculate. If you spend it for day-to-day operations, versus capital improvements, it’s NOI.

With that in mind, here’s what the Virginia Plan proscribes for parish giving:

Grace church, however, has consistently pledged at roughly 10% of pledge income. That excludes:

The result is that Grace Church supports the diocese at a level consistent with a church with revenue of less than $100,000 annual income.

Again, keep in mind that this does not include items that are off-budget, like the music program, the EYC hoagie sale, the altar guild, and other program areas.

That brings us to a recurring issue when examining life at Grace Church: Thanks to years of feckless leadership, the church has been living beyond its means for decades. It can afford to pay its rector $200K a year, offer lavish farewell parties for the head of school, and provide generous purses to Bob Malm and his family. There’s plenty of money for the annual weekend at Shrine Mont, which for many is nothing but a drunken binge. And there are mountains of flowers at Easter and Christmas (yes, although these are restricted solicitations, they are still part of NOI).

So while Jason Roberson is bloviating about how the parish is “growing and thriving,” let’s keep in mind that it’s been ignoring its obligation to the diocese for years. That despite the fact that the diocese apparently fully honors its commitment to the national church.

In other words, most of the church’s funds have been going to meet its own needs and desires, and to subsidize Bob Malm, versus to actually being a church. That is, or should be, a wake-up call to the parish, whoever is foolhardy enough to become interim, and the diocese. Simply put, it is a matter of survival.

There’s also a catch-22 that confronts the parish: In a church so organizationally narcissistic that it doesn’t see an issue with a priest who commits perjury, or with trying to drag a dying woman into court, do you choose to integrate into the life of the larger diocese? If so, how do you increase your diocesan pledge by roughly $80,000 annually at a time when the parish cannot afford its current cost structure? Yet members are likely to be highly resistant to any arrangement that interferes with the whole living-life-large paradigm under Bob Malm.

In closing, it’s worth noting that I repeatedly cautioned Bob, beginning in 2014, about the looming budget debacle, warning that absent major cutbacks the church was on a trajectory to become insolvent as early as the summer of 2016. In most cases, in true Bob Malm fashion, I didn’t even get the courtesy of a response.

Things are now at a state where the church may need to consider taking on mission status, accepting help from the diocese, and rebuilding from the ground up.

Grace church is in serious trouble.