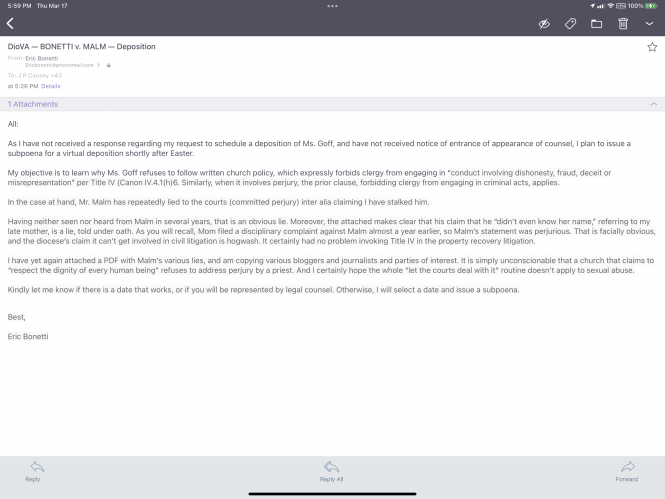 We are in the discovery phase of litigation, and I have notified defense counsel that I intend to depose Anne Turner, Lisa Medley, Susan Goff, and possibly Kelly Gable. Apropos the latter, we had previously agreed that I would send her written questions to answer. But rather than responding, Kelly got a new lawyer, and we are awaiting word from her attorney on next steps. That should be interesting, given Kelly’s history of alcohol abuse, her propensity for hitting on married men, her apparent mental illness, her questionable veracity, her gossip, and other issues.

Goff apparently is not represented by counsel and in true TEC passive-aggressive fashion has not responded to a previous request for a deposition. You’d think that, if she has nothing to hide, this would be a pretty simple matter. Apparently not so, and I am very interested in learning why she chooses to ignore the canonical strictures prohibiting Bob Malm’s perjury.

I’ve attached the letter I sent to Ms. Goff, which I copied to numerous reporters, members of the diocese, etc. A reasonable person might well ask how it is that TEC claims to be building “beloved community,” even as it sanctions Bob Malm’s perjury.

I’ll aslo be filing tomorrow a response to Wayne Cyron’s pleading in which he objects to sharing details of his billing, despite the fact he says he’s seeking fees. Good luck there, Wayne—I am as judgment proof as they come. Everything is in irrevocable trust.