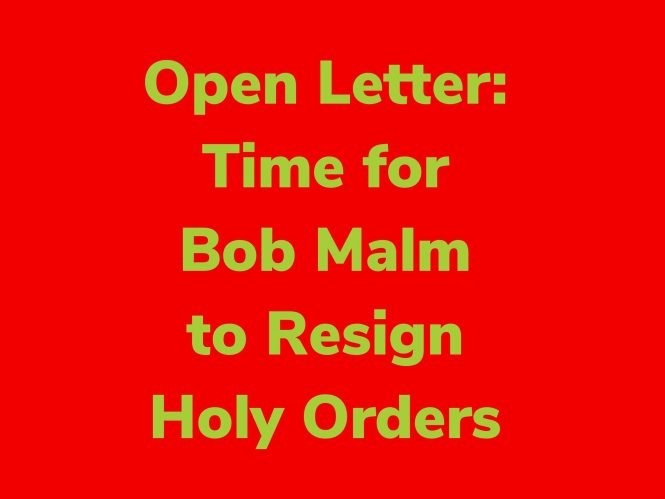 I recently worked with a woman who was sexually abused in TEC. While my case does not involve sexual abuse, her situation led me to write this open letter.

It is time for Bob Malm and his enablers to resign from ministry.

Bob’s multiple instances of perjury, his false statements to the courts and the police, his unrepentant attitude, together with his track record of lying to vestry members about HR issues and bullying conduct, make him unsuited to ministry. One need only ask Phil Smith and others who have been involved in the church about Malm’s repeated lies about how folks shouldn’t worry about issues with church staff—after all, they’d be retiring this year. Malm told this lie repeatedly over the years.

Similarly, Bishop Susan Goff, Shanon Johnston, Alan Gates. Melissa Hollerith, and Sven vanBaar need to resign from ministry. The corruption and cover-up by so-called leaders such as these are destroying the Episcopal Church, even as they say with a straight face that clergy perjury is okay absent criminal charges.

It’s time to end corruption in the Episcopal Church. There must be top-to-bottom revolution within the church if it is to survive, and it must start with a commitment to personal, spiritual, and relational integrity.

There is no room for perjurers like Bob Malm in the Episcopal Church.