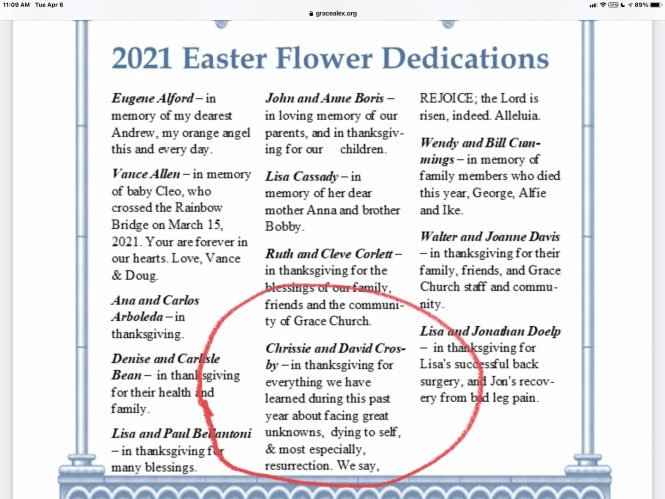 When I saw this year’s Easter bulletin and flower dedications, I had to laugh and roll my eyes. Why? Because David and Chrissie Crosby remain clueless.

In their flower dedication above, David and Chrissie talk about dying to self and resurrection and all that they have learned over the past year about those topics. But they don’t appear to have learned anything at all, because resurrection involves the death of the past and the growth of new life.

In the case of Grace Church, the parish continues to try to defend its perjury, concealment of evidence, its witness tampering in court, and its defamation. Thus, it has not died to the past, but continues to pull the past into the present.

And unlike the women who appeared at Jesus’ tomb on Easter morning, the church is not willing to approach reality and look it in the eye. One can readily look at the screen caps of perjuring priest Bob Malm’s emails to see that he has committed perjury, concealed evidence, and tampered with witnesses. As to Kelly’s defamation, I am out and about, wandering around, doing my thing. So that in itself speaks to her claims of embezzlement, and I have encouraged Motormouth to put her money where her mouth is and file a police report.

Then there is the uncomfortable reality for David and Chrissie of Bob Malm’s lie to the bishop. Myriad parishioners can confirm that Bob’s email about the timing of my arrival at Grace is a lie, but David and Chrissie are still in “Bobby Malm, You’re Amazing!” sycophant mode, so they will never walk to the tomb and look the truth in the face. That truth is that perjuring priest Bob Malm is a priest in name only. He is a liar, a perjurer, a bully, a manipulator, and worse, and you may quote me on that. But for David and Chrissie to look that reality in the face is to call their very faith into question, so they will never do it. Even worse, David and Chrissie are apologists and enablers. One cannot be true to one’s claim to be a Christian and endorse Bob Malm’s behavior, nor can one turn a blind eye to it.

Let me close with this: Grace has neither died to self, nor died to its past, nor is it moving towards resurrection. Instead, it is imploding due to its own rot and corruption. To paraphrase Jesus, it’s glittery and pretty on the outside, but it is rotten and stinking at its core.