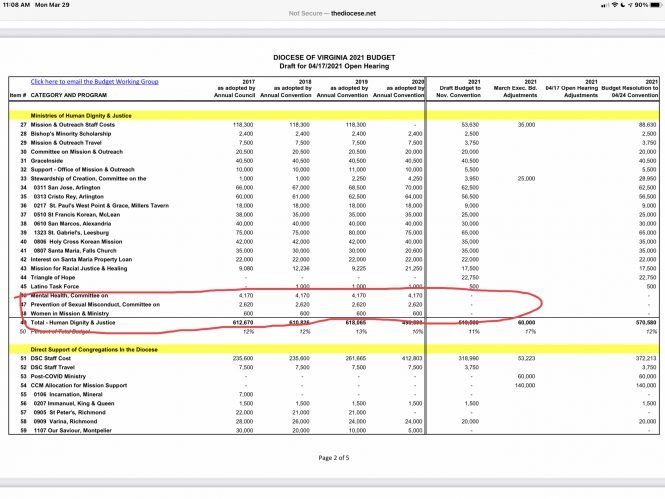 Okay, we get that times are tough. But the proposed diocesan budget is a hot mess.

Tellingly, three areas of the budget that should be non-negotiable (and already were getting short shrift), are defunded. These include women in ministry, mental health, and sexual misconduct prevention. All three are areas already impacted by the pandemic, with sharp increases in the mental health issues in all segments of the population, while reports consistently show dramatic increases in sexual misconduct and domestics violence. In short, the pandemic has disenfranchised those already struggling for a full seat at the table, and the diocese does nothing to address these issues.

That also contrasts with the efforts of the Roman Catholic Church, which despite its myriad failings in these areas, maintains diocesan offices to ensure that church staff and volunteers are fully trained. Here is a screen cap of the Catholic Diocese of Arlington’s recent statement on this issue, which recognizes the surge in misconduct due to the pandemic: 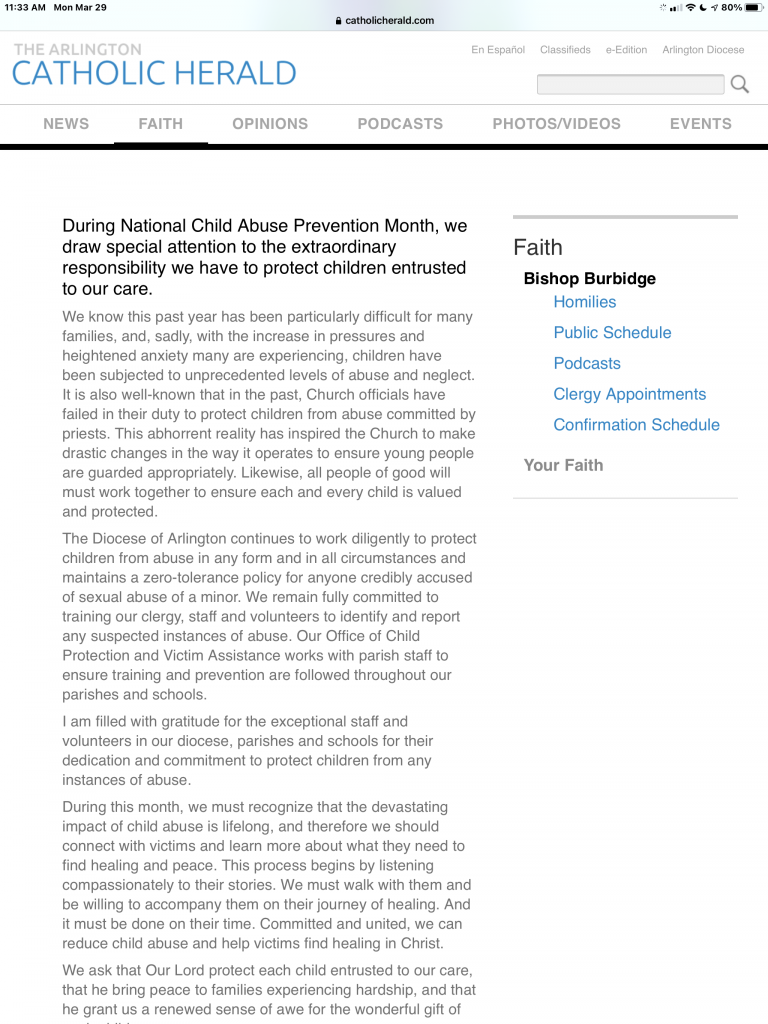 I would add that the Episcopal Diocese of Virginia’s not funding efforts to prevent child abuse is a decision that is profoundly foolish over time. Not only does this send exactly the wrong message, but it leaves the diocese open to legal liability, including the possibility of devastating punitive damages. And no, the sleeping beauty defense is not going to work. We get that the Episcopal church is hierarchical when it comes to property, congregational in polity when in comes to accountability, but courts are not likely to agree.

It’s also interesting that some of the budget cuts are not sustainable. For example, there’s a six-figure drop in the cost of the bishops themselves, attributable no doubt to the lack of episcopal visitations during the pandemic. But when the pandemic lifts, those costs will resume, even as there is no sign that revenue will increase.

The unsustainable nature of the current budget underscores another point that is becoming increasingly clear: Susan Goff’s tenure is less and less about healing and reconciliation, and more about keeping the seat (barely) warm until the next bishop gets in.

And the shambolic nature of the last search for a bishop, the uproar with the Trustees of the Funds, the chaos over the 2021 budget, and the announcement that the diocese is trying to sell assets and unrestrict funds all point to the conclusion that the diocese is in dire trouble. (Let me reiterate that Truro, with its long history of oppression directed towards LGBTQ persons, is NOT an appropriate buyer of the property it now occupies.)

Returning for a moment to the ministries that have been zeroed out, we all recognize that there’s not a whole lot of cost involved in using the Church Pension Group videos. But there should be posters in each parish, a non-Title IV person who can help with complaints, and handouts and training. Indeed, even the diocesan Title IV intake officer and chancellor are woefully untrained, and the diocese knows it.

Clearly, this is a diocese that has utterly lost its way.