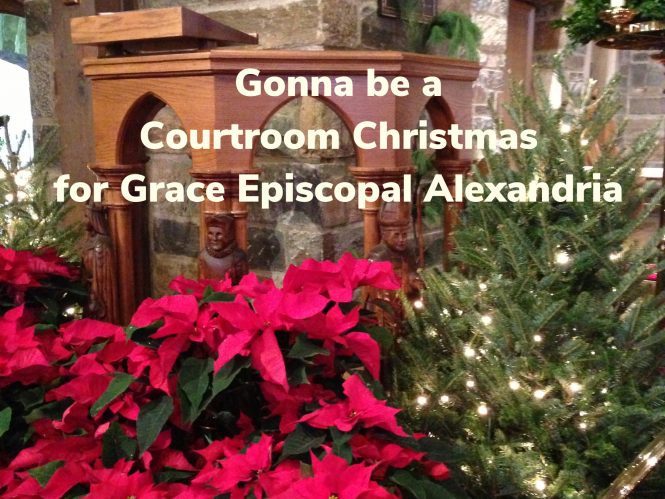 With the Christmas holiday approaching quickly and Anne Turner now official as Grace’s next rector, it’s worth noting upcoming events in the flurry of litigation around perjuring priest Bob Malm and the parish. Suffice it to say while it may not be a white Christmas, it will certainly be a courtroom Christmas.

In Alexandria, there is a status conference meeting coming up on December 13 in Alexandria Circuit Court for the defamation and abuse of process cases against perjuring priest Bob Malm. Typically there’s discussion about whether the parties might wish to settle, and to set a trial date. I doubt we’ll see much happen other than setting a trial date, as perjuring priest continues his lies.

For example, in the Massachusetts litigation, perjuring priest Bob Malm claimed I set up a fake St. Gabriel’s site. No rational actor would conclude that, as the site was critical of the decision to hire a perjurer as priest, and contained lots of information on the various court cases. Thus, Bob is either lying again, or his hold on reality is so tenuous that he’s incapable of distinguishing truth from fiction.

Meanwhile, December 23 is motions court for the defamation case against Grace Episcopal Church. During that meeting, church attorneys will try to argue that the parish’s concealment of the defamatory email from Kelly Motormouth Gable, to perjuring priest Bob Malm, which was then forwarded to the bishop with an added lie supplied by Bob Malm, is justification for raising the statute of limitations. The church also argues that there the communication is privileged — I mean, don’t most churches accuse their former members of being criminals? Of course, that conveniently ignores the fact that neither Kelly nor perjuring priest Bob Malm has been willing to file a police report, despite the fact that there is no statute of limitations in Virginia for felony embezzlement. Oh, and the church claims there’s a duty to engage in that sort of conversation, conveniently forgetting that malice, as demonstrated by Bob Malm’s lie about the timing of events, overcomes any privilege that might exist.

That’s Grace for you — still trying to make excuses for its conduct.

As for Lindsey Malm Anders, she still has not provided discovery as required by law, so a motion to compel is coming, as is one for perjuring priest Bob Malm.

I also am in the process of following up on perjuring priest Bob Malm’s admission that he lied when he stated that Mom or someone claiming to be her contacted him repeatedly. Not much to say on that topic just now, but suffice it to say the results are likely to be quite serious for Bob.,

Speaking of Massachusetts, perjuring priest Bob Malm’s harassment prevention case is going up on appeal, so he’ll be facing some serious legal fees in the coming weeks.

I’m taking my time, but the defamation, intentional infliction of emotional distress, and abuse of process cases against St. Gabriel’s are all pending.

I’m also working on a case in the Federal District Court for Massachusetts, but details will have to remain confidential for now.

Best of all, there are signs the ACLU may jump in. That would be very, very bad news for perjuring priest Bob Malm’s and the Episcopal Church and would result in massive media coverage.

Not much news out of PA, so I have to ping his attorney  Rachel Wenger and see where we are with things. But I am far from done with perjuring priest Bob Malm on that front.

Bottom line, even as we approach Christmas — a time when we celebrate the coming of the divine — Grace Church remains true to form as it displays conduct that is anything but holy. Indeed, in just a few days the church’s attorneys will be in court, trying to convince the judge that churches have a duty to discuss false allegations that a former member embezelled from his employer, even as that gossip comes bundled with a lie on Bob Malm’s part. And for the record, lots of folks at Grace Church know that Bob Malm lied to the bishop when he claimed that I my experiences with Kelly predated my time with the church.