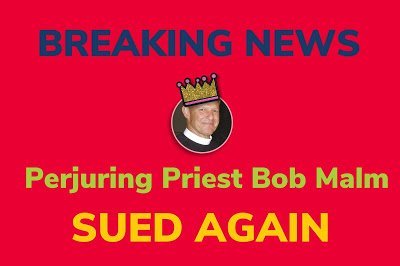 Those who know perjuring priest Bob Malm would agree: He is intelligent.

But when it comes to common sense, perjuring priest Bob Malm is dumber than dog dirt. Specifically, Bob just cannot keep his big mouth shut. Not even with multiple lawsuits under way against him.

As a result, perjuring priest Bob Malm faces yet another lawsuit, which will most likely be filed tomorrow. I can’t say more just yet, but it is a done deal.

Of course, that provides another example of Bob’s monumental stupidity and lack of Christian ethics: In 2015, I offered in writing to settle our dispute in exchange for nothing more than his written promise to leave me and Mike alone. I also asked to treat the discussion as confidential. Through Sugarland Chiow perjuring priest Bob Malm rejected our offer. So now he’s got his wish: litigation and publicity both. And plenty of both at that.

Moreover, more than five years later, I am not going to run out of steam any time soon.

Nor will our conflict be resolved in the near future (if ever), for perjuring priest Bob Malm has yet to admit he lied under oath when he claimed that my mother, or someone claiming to be her, contacted him repeatedly to set up appointments, only to cancel. And his childish efforts to portray himself as a victim of stalking are simply resulting in more adverse publicity, more leafletting, more protesting, and more damage to the church that he purports to serve.

Perjuring priest Bob Malm still doesn’t get it, which is that, if nothing else, I will outlast him. That’s true even if I die tomorrow, for this domain name and a variety of other key assets are prepaid for years to come. So documentation of perjuring priest Bob Malm’s misconduct is going to be around for a long, long time.

Better still, perjuring priest Bob Malm has conclusively shown that he lies extend to his own bishop, for even Jan Spence and Kelly Gable can attest to the fact that his email alleging that I embezzled contained a fabricated timeline. Indeed, Elizabeth Legere and Patrick Crerar also know that Bob’s email is a lie. So while I doubt any of them will have the courage to speak truth to power, large swaths of the church have already seen for themselves how Bob conducts himself behind the scenes.