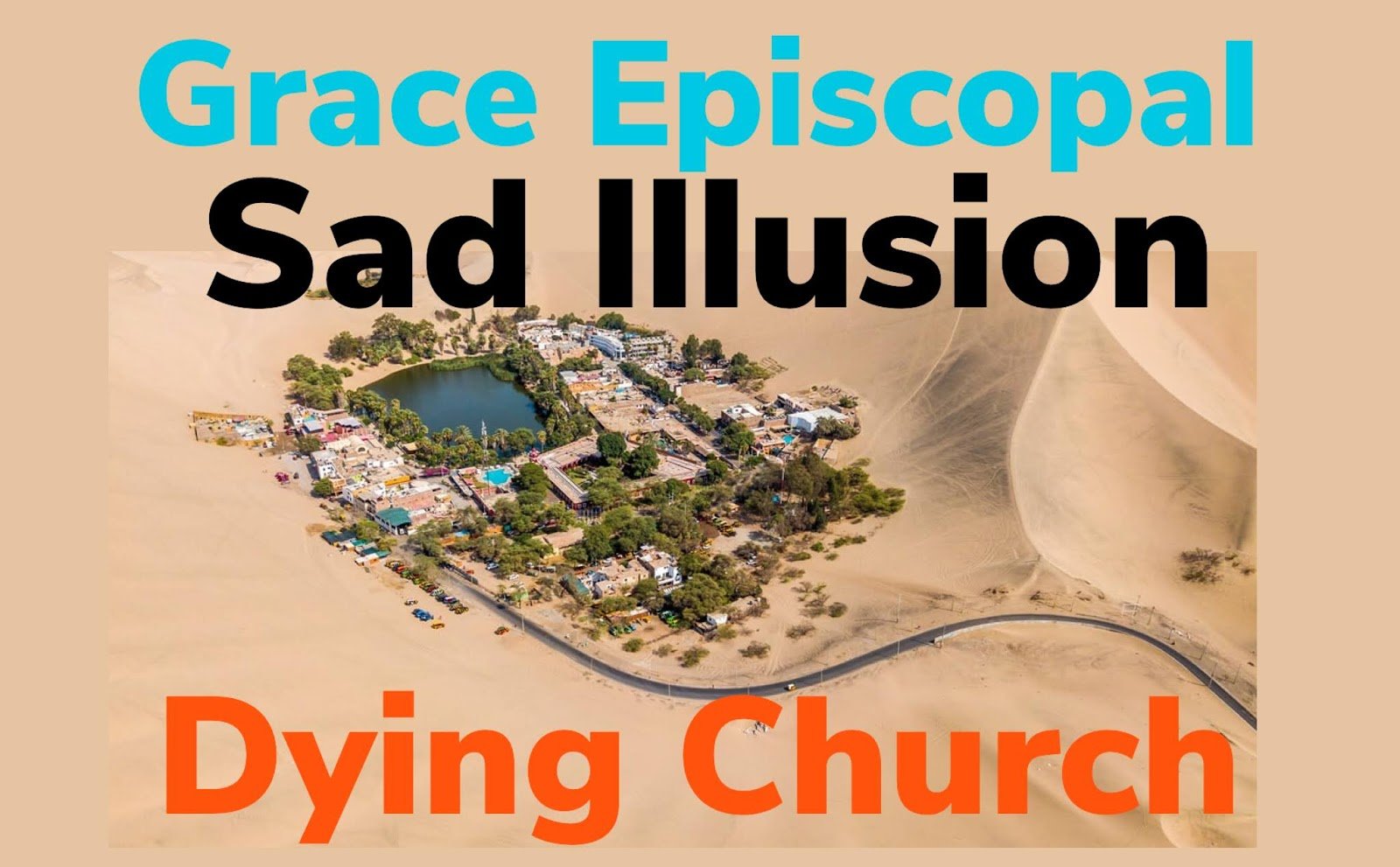 As Grace’s discernment committee begins the long, arduous road towards finding a successor to Bob Malm, the unpleasant reality of the mess Bob left behind looms. That includes the various lawsuits now under way against the parish, the diocese, and members of Bob’s family, which were precipitated by Bob Malm’s conduct as rector.

It’s also true that neither the parish, nor the diocese, can win in court.

What do I mean by that? Couldn’t they find some way to get the current cases dismissed?

The answer is simple. All litigation involves hazards and risks. So yes, the church and the diocese could conceivably obtain favorable results in court. But that doesn’t mean they actually win.

As with many conflicts, the current conflict is one that involves myriad issues. Many are not amenable to resolution in court. These include:

As things stand, the worst thing that could happen to the church would be to prevail in court. Doing so would further reinforce the current conflict, while providing additional grounds for concern among outsiders who are looking at the church.

Moreover, a victory would help those with their heads in the sand assure themselves that, in fact, Bob Malm could not have committed perjury and otherwise been abusive.

I mean, he’s such a good guy. He’s caring. He married us. He baptized my kids. His sermons are great. Anyone who thinks otherwise is deluded, maybe dangerous, certainly dysfunctional.

These are the logical fallacies and magical thinking that the Kemp Williams, Jean Reeds, Easter Thompsons, Susan Goffs and others in the church and diocese deploy to avoid dealing with the inconvenient truth, which is that Bob Malm is a bully, a liar, a perjurer, and someone who thinks it’s okay to try to drag a dying woman into court. One has only to read Sugarland Chiow’s courtroom rhetoric and fabrications to realize just how toxic this paradigm has become. Or as one Episcopal priest with first-hand knowledge of the issues at Grace says, “They have a lot of work to do.”

Thus, a courtroom victory would allow the blind sycophants in the parish to brush things off, assure themselves that that damned Bonetti is “unhinged,” and return to their toxic ways, oblivious to the damage they cause to a church they claim to love. But if they love Grace church so much, why do they behave in a way that is causing lasting harm to the parish?

Think about it: In all the emails from within the parish, we consistently see Bob Malm trying to stoke fears, while Jean Reed, Kemp Williams and others claim to be able to do what no licensed mental health professional may legally or ethically do, which is to opine on the mental health of someone with whom they have not met to discuss the matter directly. Yet in the midst of this bloviating within the parish, the one thing one never sees is any concern for the person who, in Jean Reed’s words, is “troubled.” Perhaps church members would do well to spend less time gossiping about others, and more time dealing with their own shortcomings. In fact, if they did, they might come to understand why neutral third parties say, “They may seem sane to themselves, but this group of parishioners seems hateful and childish to outsiders looking at their behavior.”

Nor is the diocese any better.

From that corner, we get the laughably appalling notion that clergy misconduct is only actionable if it it illegal. That conclusion enjoys the full support of Bishop Susan Goff, the Rev. Melissa Hollerith (who, amusingly, teaches ethics at St. Albans, and whose husband Randy is dean of the National Cathedral), and undoubtedly that of JP Causey, the diocesan chancellor. The latter is noteworthy, as his capacity for bad legal advice appears to know no bounds. For example, in the Title IV case at St. Thomas’ in McLean, Causey would seem to be the knucklehead who suggested to the Virginia bishops that they ignore the requirement of Title IV to provide a pastoral response to the congregation, but instead to keep the matter at arm’s length for fear of liability. The result was lasting damage and hard feelings within the parish. Nothing like protecting the organization at the expense of the people who make it up, huh?

And the cluelessness continues. The Rev. Sven vanBaars, the dingbat intake officer who thinks that clergy misconduct is only actionable if it results in criminal prosecution, has been elected as a delegate to general convention (GC). I guess that’s good—he can hang with fellow delegate JP Causey at the upcoming GC in Baltimore and commiserate about the protesters outside.

The bottom line is this: Until Grace Episcopal learns to be a church, versus a religious club, and worships God, versus Bob Malm, it will decline.

Yes, Bob’s carefully crafted communications have all the right church-speak and Jesus-babble, developed through observation, mimicry and repetition, but they are empty, hollow. Similarly, the church building is full of bright shiny things, carefully polished, but they mean nothing.

Same for the friendly, welcoming congregation. Yes, people are cordial, but criticize Bob Malm and see just how long that welcome lasts. Just check out the comments from the parishioner urging me to commit suicide if you want proof.

Same for the church’s other promises. For example, giving is supposed to be confidential, but Lisa Medley has no problem posting details of your giving on social media, even though, true to form, she gets the specifics wrong. Would you really want her potentially posting details of your bequest to the church on social media? The Legacy Society (of which I was a member) promises confidentiality, but if the church cannot protect your information while you are alive, why would you think it will do so when you are dead?

Of course, it is true that parishioners have done an admirable job of stepping up giving, even as number of pledging units collapses and attendance drops to record lows.

But the reality is that this is a church that is still trying to defend Bob Malm’s perjury, his efforts to drag a dying woman into court, and his various courtroom fabrications. Indeed, one has only to look at Malm’s emails to diocesan officials, replete with calling me “sick,” “twisted,” and “dysfunctional,” to know just how toxic the parish has become. And in honor of Bob’s efforts, the church has named the “new” narthex after him!

Nor is time on the church’s side. With vast swaths of the church membership well into retirement, the next 10 years will result in major demographic shifts. And yes, bequests to the parish may buy time, but even if parish investments were adequate to fully carry the church’s operations, the church is nothing without people in it. (Covering just current operating and maintenance costs for the building would require an endowment of $3.75 million, for the record.)

Neither is the church’s role in the community likely to pull in members. With well under 3 percent of total revenue going to local outreach and the diocesan pledge seriously underfunded, the place is hardly a center for outreach, and it sure as hell isn’t doing any healing.

Going forward, the church’s only hope is to clean up its act. When people see that Grace Church really is what it claims to be, a center for outreach and healing, then it can begin to rebuild. But as long as it clings to the notion that Bob Malm could not, would not, be a bully and a perjurer, it is in dire trouble. Nor is it going to thrive when people in the church think it’s okay to call others “domestic terrorists;” to urge others to commit suicide; and for Alison Campbell, the altar guild, and the choir to play their childish games.

So yes, the church could win in court. But it can’t and won’t shut down the ability of people to criticize its actions, to discuss the parish in public and in cyberspace, and to warn people about the hypocrisy of life at Grace Episcopal. As the saying goes, the court of public opinion is open 24/7, 365 days a year, and there is irrefutable evidence that Grace is a toxic church where it’s okay for the rector to lie in court, and where this dynamic carries through into the daily life of the church.

And the truth will out, meaning that sooner or later, even the most diehard loyalists will find out that the parish is nothing but a pretty and whimsical illusion. And like the mirage of an oasis in a desert, getting tangled up with Grace Church may be a positive experience, even for a few years. But in the end, the painful reality sets in, which is that the church is anything but a safe refuge from the hot and barren desert.