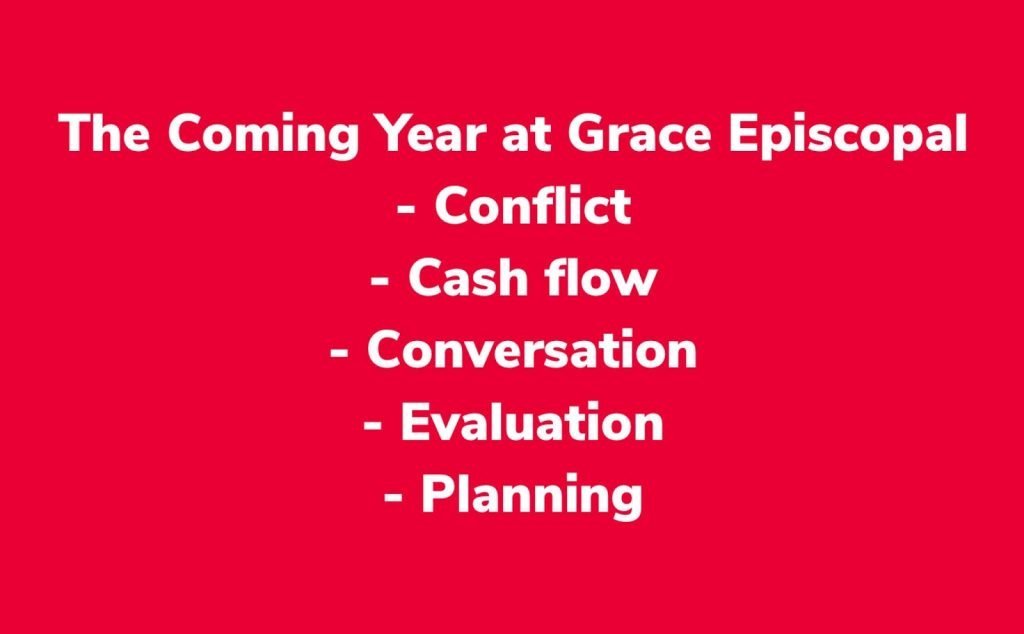 Years ago, a regular at Grace Church offered the observation that he “didn’t want to be there when Bob Malm leaves.”  While I am confident that he does not consider Bob Malm to be a narcissist, nor given it a whole lot of thought, he stumbled onto something. Instinctively, he recognized that, after years of Bob Malm’s self-centered antics and manipulation of members and the vestry, taking Bob out of the mix will result in bedlam. And on that score, that individual is spot on.

As is typical in such situations, far too many parishioners regard their goal as meeting Bob’s approval. Indeed, as one former assistant rector put it, “There is such a sense of shame among those women when something goes wrong at the altar guild.” That’s both telling and appalling, for serving God should never come with shame. Yet the altar guild acts like an organizational narcissist, worried above all about how things look, and protecting its perceived collective interests, versus attending to the common good of the parish.
How does the altar guild enforce its priorities? By treating any perceived deviation as grounds for shunning, ostracism, and criticism. Hardly indicative that its true purpose is serving God.
Similarly, both the choir and the vestry far too often engage in bad behavior when members feel threatened. The same is true for church staff, which historically has had no issue with yelling at church members or otherwise engaging in inappropriate conduct.
Nor are church members generally immune from these trends. Whether it’s gossiping about one member’s alleged penile implant, issues within Bob Malm’s family, or married members who are rumored to be conducting homosexual affairs on the side, things get ugly right beneath the surface. And of course, there are issues like Lisa Medley’s disclosure of confidential giving, documented on The Wartburg Watch, that underscore just how toxic the parish really is. Moreover, members feel it is their prerogative to wade into conflict and punish the person they believe is the offender by gossip, bullying, and social exclusion. (Yes, I am referring inter alia to Alison Campbell, Jan Spence, and Lisa Medley.)
So, from this ugly mix, the Perjurer-in-Chief, Bob Malm, is set to leave. His departure will set in motion a jockeying for power at every level. As part of this, whoever the interim is will face strong headwinds, including both being compared to Bob Malm, and when he or she does stuff that varies with “the way we’ve always done things,” being confronted with the bullying, shunning, and other misconduct that is part and parcel of life at Grace Church.
This underscores the larger issue, which is that church members will need to explore the promise and problems of Bob Malm’s tenure with the parish. Doing so will face tremendous resistance, as the traditional way the parish handles such things is to ignore them and shove them under the rug. So the problem is two-fold: Both unlearning harmful approaches to dealing with conflict, and then dealing with the underlying issues themselves. And keep in mind that these issues have had 30 years to fester; unlearning them won’t happen in three weeks, or even three years.
Then there’s the ethical component of parish life. Grace is a church is which it’s okay for the rector to commit perjury, to subpoena the dying, to file false police reports, and to engage in truly ugly rhetoric. With Jeff Chiow and Bob Malm as role models, it’s difficult to know even where to begin. Certainly, the legacy they leave serves as a dismal role model for children, and it’s going to be difficult to attract new church members with this as part of the church’s history. And Jeff remains active at the parish, which means he undoubtedly will try to defend and justify his actions, despite the damage they have caused to the parish.
Giving also wil be an issue. With more than 1/3 of pledging units gone, the remaining donors have stepped up their giving. But time and demographics are running against the parish, and the church has never understood that in order to grow, you have to make a commitment to grow.
Nor does the parish have a vision of the future. Yes, members jealously guard their prerogatives and the things that are important to them, but beyond that, the church has an entirely tactical worldview. Even the HVAC project was simply ignored until events forced the church’s hand, despite the fact that there have been dozens of warning signs in recent years. So the church will have to decide whether it wants to grow, and what it wants to be in its future, or it can continue on in swimming in its ever smaller stained glass cesspool, blissfully unaware that the waters are toxic and it is slowly. So, this will be a point of contention, but the good old days of living for today are fast coming to a close.
Of course, all this change means that members will revert to type, so conflict will loom large during the coming year. As a result, both attendance and giving likely will decline, and some members who leave during the coming months will never return.
Will Grace Church make it? There’s reason to doubt it.
But no matter how things pan out, there will be some serious fireworks in the year ahead.