One recent amusing change is that Grace Church has pulled the vestry minutes from the website. Leaving aside the fact — the “burning question,” as Kemp Williams would call it — that I don’t rely on the website for access to the vestry minutes, it shows how utterly clueless Bob Malm and the church are.

Why is that? It’s because when an organization is in crisis, which St. Dysfunction clearly is, the secret to turning the situation around is utter — almost ruthless — transparency. That’s right, warts and all, you make a public commitment to transparency and accountability.

Going the opposite direction suggests to detractors, of whom Bob now has many, both within and without the church, that you have something to hide.

And indeed that is the case. Bob is eager to reduce awareness of his multiple courtroom lies, his lies to parishioners (ranging from his infamous, “Don’t worry about it, they’ll be retiring this year,” to his claim, in writing, to multiple parishioners, that I agreed at the Fredericksburg meeting to adhere to the bishop’s “directives” — a curious proposition for someone not then even a member of the diocese of Virginia). Indeed, in utopia, Dysfunctional Bob would get a confidentiality agreement and the opportunity to slap a little Jesus-babble on things, with his usual inane claptrap about moving forward in grace, love and peace, as he continues to avoid accountability for his actions.
Moreover, Bob would like to shield from view the church’s collapsing finances and attendance. Yet the reality is all of that data gets reported to the national church and is a matter of public record, and available online to anyone who may be interested. Moreover, any church that can’t or won’t publicly share its board/vestry minutes, financial reports, and budget is one of which you should be most wary.
In short, at a time when numerous questions remain about the multiple governance issues and problems at St. Dysfunction, it’s utterly boneheaded to try to be clever by withholding information.
Speaking of, if you’re pledging at Grace Episcopal, did you ever get an good explanation as to the thousands of dollars of cash and stale checks found in the parish administrator’s office when Charlotte left? As in how it happened, and why no one discovered it for years? Or what steps have been taken to prevent a repeat? As I have said before, “We trust Beth,” is NOT an internal control.
I’ve got $100 that says the best anyone has gotten is some deflection from Dysfunctional Bob about how “we all knew Charlotte had to go.” Which does absolutely nothing to answer the question.
My advice if you are pledging: Caveat emptor. There is less transparency at Grace Church under Bob Malm than there is at many evangelical mega-churches, and this should make you very, very cautious.

In the meantime, check out this screen cap from churchtransparency.org, especially the part about increasing donations. Hashtag clueless. 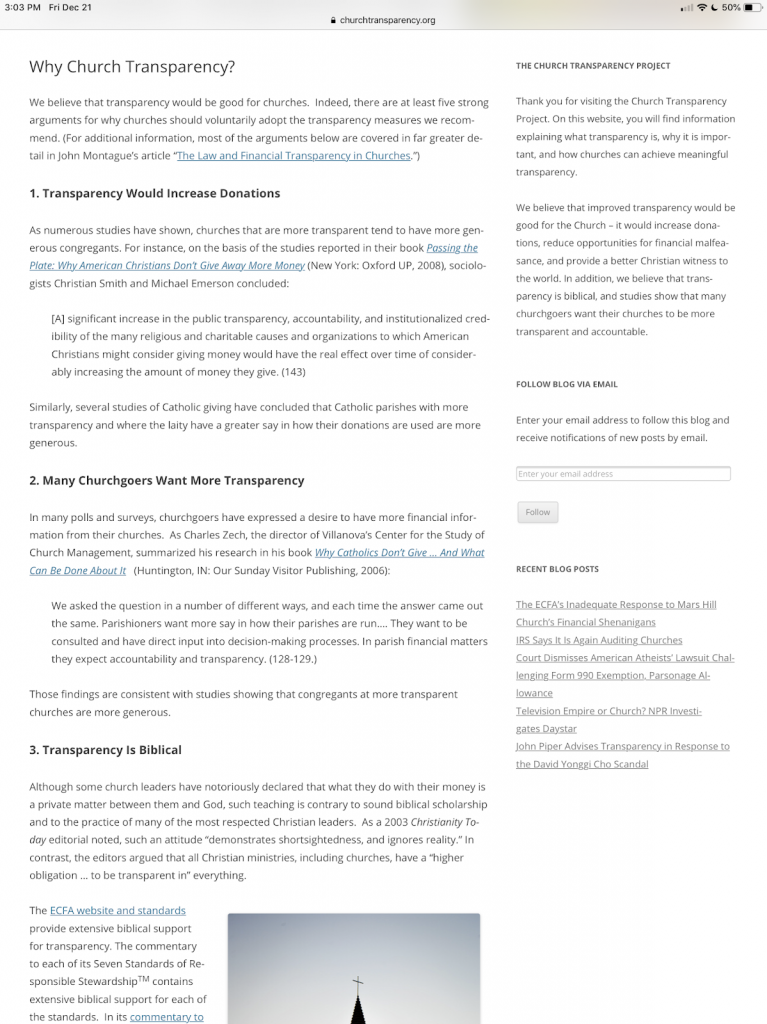