“If you chose to ignore me. You will highly regret it. I’m not playing around anymore. You are absolutely disgusting and quite frankly I believe a judge will see it the same way. ”

If my experience with abusive Episcopal priest Bob Malm has taught me anything, it’s the importance of maintaining free speech. That includes standing up for fellow bloggers. So, before we go any further, let me say this to Greg Kelley:


I’m publishing about you too. If you want to make Amy “highly regret” anything, I guess you’ll need to come after me as well.

Those who follow issues of abuse may be familiar with the case of Greg Kelley, the former Leander Texas football star who was convicted in 2014 of aggravated sexual assault of a four-year-old-boy at a Leander home daycare center.

After serving time in prison, the Texas Supreme Court overturned Kelley’s conviction, citing problems with the police investigation. “I was given my freedom and I’m happy with it,” said Kelley.

Of the story, fellow blogger Amy Smith of the Watchkeep blog says she first learned about this case from news reports during Greg Kelley’s trial and conviction in 2014. Along with fellow blogger and friend, Dee Parsons at The Wartburg Watch, she posted an open letter of support on her blog to the child sexual abuse victim that testified in the criminal case against Greg Kelley. After his conviction, Kelley voluntarily accepted a sentencing plea deal for 25 years in prison and waived his right to appeal.

In another blog post, One with Courage, Amy wrote:

I received a phone call yesterday afternoon from Pastor Bob Brydon of Generations Church who is helping lead the effort to “fight for GK,” the man convicted of super aggravated sexual assault of a 4 year-old boy, in prison for 25 years after accepting a sentencing deal waiving his right to appeal. Bob immediately let me know how offended he was at our statement, saying he considered it “slander.” I asked what was slanderous about it, but he did not answer. He just began a rant about how the “real perp” is still out there on the streets.

Survivors Network of Those Abused by Priests: TX Church to Hold Rally for Admitted Molester

Fight for GK: they said 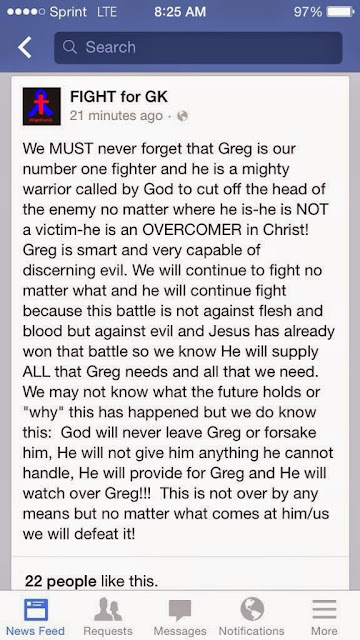 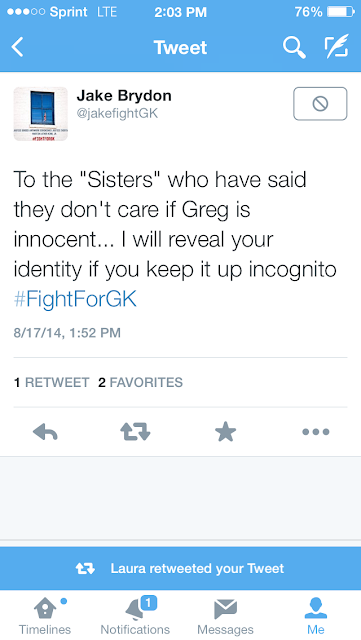 Hello Amy, you might remember me… Greg Kelley. The same guy you said all of those nasty things about when I was being falsely accused and wrongfully convicted?

Well… I’m sure you’ve already heard but I’m exonerated now, all 9 judges of the CCA have declared me innocent.

I just wanted to send you this message because while you were tag teaming with the chief of police of CPPD to slander my name, my family and everyone who loves and fought for me, I was on the sideline taking note of all of it.

Fighting for my innocence is over, now it’s ACCOUNTABILITY FOR THE PEOPLE WHO DID THIS TO ME.

The chief and cedar park is in HOT WATER right now. Don’t believe me? Google it.

I wanted to send you a friendly reminder that I have not forgotten how you were part of the problem and I really don’t like bullies.

*that little stunt you pulled about me living at jakes… that’s all documented.

Let me know if you are interested in resolving this outside of court, my terms are pretty simple.

Let me remind you the false allegation you filed against me at Jakes house IS A CRIME and quite frankly I’m looking for one good reason not to file a law suit on you. That’s right, with the help of the Texas rangers and private investigators you are exposed on so many levels. Hope you have a good lawyer because I have several. Do the right thing Amy.

If you chose to ignore me. You will highly regret it. I’m not playing around anymore. You are absolutely disgusting and quite frankly I believe a judge will see it the same way.

Of these emails, Amy says:

Greg Kelley stated that with the help of the Texas Rangers and private investigators, I am “exposed on so many levels.” I emailed the Texas Rangers headquarters in Austin, Texas yesterday. I received a reply today saying that I could contact the Ranger Austin Northwest Field Office at 512-464-3732 and request to speak to a local Ranger. I called that number this morning and spoke with Brenda who answered. I explained why I was calling, and that Greg Kelley stated in an email that I had been investigated by the Texas Rangers. She took my contact information, and said she would give it to the Ranger assigned to the Greg Kelley case.

So if Greg has all these lawyers at his beck and call, why is he making stupid statements of this sort? The very first thing any good lawyer will tell a client in his situation is to make no comments. None. Even worse, don’t make contact with witnesses, those who have written about the situation, or others connected with the case. Judges have a profound dislike for subjects threatening people, and Greg’s behavior is, at best, stupid. And for those who want to invoke God, all I can say is the claims in the media about Greg’s alleged use of AdultFriendFinder.com for multiple incidents of sex with strangers certainly don’t suggest that Greg is a particularly devout person.

There’s been a really ugly side to the whole #fightforGK thing. It’s one thing to question a conviction, to advocate for him, to support him. It’s another thing altogether to try to intimidate bloggers. We’re a resilient bunch, and we look out for each other. If you come after one of us, you come after all of us.

So. I’m glad Amy contacted law enforcement and I stand with Amy. I will do everything I can to support her.

In the meantime, my advice to Greg and those who support him is to go no-contact with Amy and other bloggers. You are doing yourselves no favors.

Bob Malm’s antics, including his efforts to drag a dying woman into court, have again garnered coverage in The Wartburg Watch.  Check it out...